Sarah left behind her college career early on and became a stay-at-home mom to her two boys, but now, nearly a decade later and expecting her first daughter, she has traveled back onto campus as a college mom. 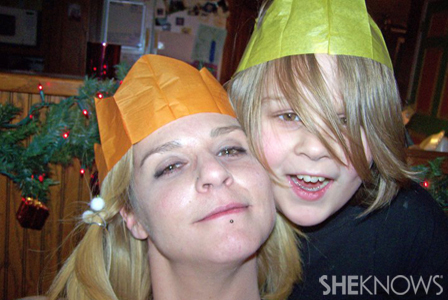 Sarah is the mother of two boys and expecting her first daughter. She’s also a college student — and as you can imagine, a non-traditional one. Her life path led her to college out of high school, but then away as she got married and had two sons. Now, her life is headed into a new direction and she’s found herself back in the classroom.

How Sarah came to be

Sarah was born in Missouri, but moved around a lot as a child due to her father’s work — her family made homes in California and Maryland before she settled back in Missouri at age 19. Her mom and dad are celebrating their 44th wedding anniversary in Texas, where they are currently living, as is her older brother.

Sarah enjoyed a fun childhood, which included unique scientific experiments. “I was a weird kid,” she told us. “When I was 6 to 10 years old, we lived on 20 acres of land, 15 of which were timber. We had a dog then and I used to love to pick big fat ticks off of him and smash them with a sledgehammer to see how far the blood would squirt.”

Despite her natural curiosity and love of nature, Sarah did not enjoy being in school when she was a child. “It was torture,” she explained. “Flat out. Despite my ability to be successful with higher level academics, I always felt like I didn’t belong there… like I didn’t fit… like I wasn’t doing as well as I should be… like something was missing… ?”

Sarah always knew that she wanted to be a mom. “In fact, I knew that I was here for that purpose — like a calling or religious vocation,” she said. She thought that at some point she’d experience a revelation about what else she wanted to do with her life, but she never truly figured out what that was going to be. “There were so many things I was interested in, but none of them ever felt like the one thing to which I wanted to devote years of my life, energy, efforts and focus,” she told us.

Straight out of high school, Sarah did enroll in college for two part-time semesters. She was still living with her parents at the time and they moved right before her first full-time semester. She was disappointed because she was finally excited about the classes and had to withdraw. After that final move, she decided to relocate back home, on her own. “The cost of living in St. Joe was cheap and there was a college here, so I moved back here in an effort to continue with college,” she shared. “However, trying to get on my own two feet didn’t leave much room for focusing on getting back to school. Then, as it does, life unfolded before me.” 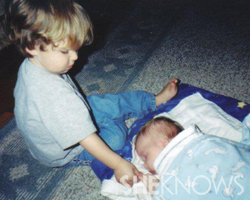 As she said, life unfolded before her in a beautiful way. She got married and had two boys, just two years apart. She never envisioned being a stay-at-home mom until she held her first son for the first time. “I could not imagine leaving him with someone else while I went to work or school,” she explained. “It felt like letting someone else raise my child.”

She explained that being a SAHM was not the reason she didn’t return to school right away — her marriage and children happened when they did because that is when the opportunity presented itself. “Hopefully, just living life would eventually clue me in to what else I might want to do later after my children were older,” she told us.

In late 2006, Sarah decided that she wanted to go back to school, but a previously unpaid bill from her first enrollment to the tune of $1000 kept her out of the classroom. “I didn’t think I was ever going to get to go back to school,” she said. “Being a newly divorced, previously stay-at-home mother of two with no real education or work experience — well, a thousand dollars was as unreal for me as finding a unicorn in my backyard.”

Fortunately, in 2010, a dear friend encouraged Sarah by paying off her debt, and in the spring semester of 2011, she was back in school. “It was time,” she shared. “I felt it with every fiber of my being. The offer from my friend to pay off my school debt was not something I could turn my back on.”

Sarah’s major is fine art studio with an emphasis in photography. Which, if you know Sarah, is no big surprise — she has a unique gift for art and photography. She hopes, one day, to find a line of work that pays the bills while giving her the gift of doing something for a living that she enjoys.

Next up: More from Sarah about motherhood and school