Diaper duty — nobody loves that part of parenting. From that very first disposable in the hospital nursery to the last one before underwear, you will change a lot of diapers. What if you could train your child to use the potty before he could even walk? 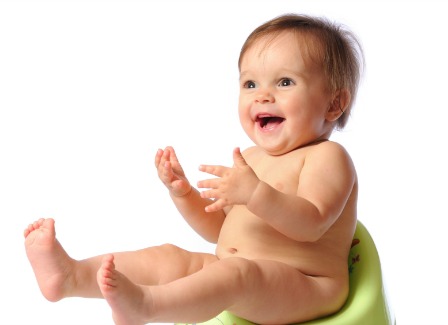 Many parents potty train their little ones before a year old — and save a lot of money on diapers.

Early potty training isn’t a new phenomenon — mothers in other countries have been doing it for years. Many American moms have become enthusiastic about elimination communication, and feel it’s the only way to go. Could it be for you?

How to handle potty training challenges >>

What is elimination communication?

Simply put, elimination communication (EC) means interpreting the verbal and physical cues your baby sends when she needs to urinate or defecate. Similar to the way we begin to interpret signals that our baby is hungry or tired, EC simply means paying attention to your baby and reading her elimination cues.

It may be a particular facial expression, body movement or sound that clues you in to her need to eliminate. You then take your baby to the designated potty place, which may be a small potty seat, an insert over the regular toilet seat, a small container or even a sink.

Families that follow EC can choose to do it part-time — when they are home, for example — or full-time. Cloth diapers are considered a back-up and many EC families do a combination of both.

Common in other countries

Researchers in Sweden followed 47 infants and mothers in Vietnam, where potty training begins at birth, and diapers are usually eliminated by nine months of age. Mothers learn the cues their babies give when they need to urinate, and communicate with them using a special whistling sound. The study concluded that these Vietnamese babies emptied their bladders more effectively, making urinary tract infections less likely. Babies in China, India, Europe and Latin America are generally potty trained much earlier than American babies.

Brittany became intrigued by EC before her son Asher was born. “After Asher was born and I got to know him a bit, it was pretty clear that he actually did signal to let us know he was going. He would squirm, grunt and kick his legs before a poop and would pop on and off while nursing before he peed,” she shares.

“Finally, when Asher was about 11 or 12 weeks old, I decided to just go for it and tried pottying him over a bathroom sink. Much to my surprise and delight, he went pee!”

Brittany admits that EC was trickier once Asher became a toddler. “Asher could stand, then walk, then run,” she remembers. “It was harder to get him [to] sit for the potty long enough to go. This period [is] often referred to as a potty strike and tends to be very common,” she shares on her blog. “I relied on timing, lots of potty time distractions and patience. The goal of EC is not early potty training, but rather responding to your child’s needs. Rolling with the punches and adapting to Asher’s changing stages was the best I could do.” By the age of 2-1/2, Asher was in underwear full time.

Deborah Gilboa, M.D. — also known as Dr. G — is a board-certified family physician, parenting expert, writer and mother. She shared her thoughts about early potty training with us. “The splanchnic nerve is the nerve that allows us to feel a full bladder,” she says. “This nerve doesn’t get completely covered in myelin in most girls until 24 to 30 months and in most boys between 30 to 36 months of age. Until it is covered, we can’t sense fullness — picture a wire with no insulation, it can’t conduct signal,” she adds. “Asking kids to learn the process of feeling full, holding the urine, getting to the bathroom and releasing urine is not possible until this point. Up until then, it’s the parent’s best guess about other cues that mean ‘I have to go!’ from their child.”

Do you think elimination communication might work for your child? Like so many parenting choices, this is a choice you need to make based on your family’s personal situation. Eventually all children are potty trained — we just choose different ways to get there.

1 hr ago
by Cristina Velocci