Most of the time, therapists, educators and other professionals really do know what’s best for the children with special needs that they work with. 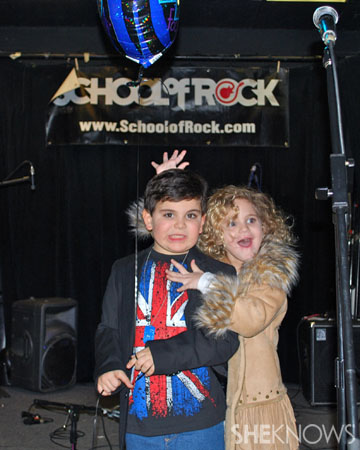 However when this SheKnows columnist went against the expert’s advice and allowed her son with autism to develop his passion for music, she definitely made the right call.

Sometimes, not often, though, I do wish that I was born incredibly gorgeous and wealthy, rather than incredibly brilliant. To me, the incredibly gorgeous have secret, exclusive societies (where they munch lettuce leaves and teaspoons of water) and discuss strategies to evade speeding tickets, get front-row concert seats, and receive full credit for items returned without benefit of a store receipt.

When my son’s therapists and educators provide their expert advice and opinions on how to best tackle his autism spectrum disorder, I listen and institute their advice 99.9 percent of their time.

Yet, when one respected educator told me in no uncertain terms to “take away all of Ethan’s music and computer time… When he listens to music or is on the computer, he is in his own world… You don’t want Ethan to be in his own world, you want him to be in your world.”

In theory, the educator was completely correct; we were desperate for Ethan to share in our world. In reality, Ethan took so much joy in music and showed such aptitude, that I rationalized the music. My rationale for his continued musical indulgence included, “It makes him so happy… ” and “Music is the universal language…” and “Study upon study has proven that music is beneficial to children with autism.”

In all honesty, giving him music was also the path of least resistance for me; Ethan was only 3, and I was a sprinter in a long distance marathon. So worn out and worn down by the continuous loop of therapies, new diet plans, IEPs, PPTs, team meetings, friendly suggestions and insurance hassles, that to argue with my son about music was relegated to the bottom of this mother’s — any mother’s — insanely long “to do” list.

Two people firmly in the “pro music” corner (aside from my husband) were/are Gena and Billy Mann. Billy is a well-known and critically acclaimed award-winning musical artist, songwriter, producer, engineer and media executive. Billy and Gena are also autism rights activists, and Billy is a board member of Autism Speaks.

Billy and his wife Gena are two of the most spectacular human beings and dear friends on the planet, bar none. One day, on a family play date, Billy overheard Ethan on the piano, dropped what he was doing, and, like Miss Muffet, sat down beside him; the big Mann and my little man began to jam. Billy played melody, and Ethan, harmony. Imagine, the man who wrote P!nk’s gorgeous and haunting “Glitter in the Air” and “Dear Mr. President” (et al.) and worked alongside icons such as Cher, John Legend, Sting, Art Garfunkel and David Guetta took an interest in my son.

After just five minutes, Billy turned to Michael and me and said, “Music is Ethan’s way out of his world; it’s how you are going to get through to him, it’s how he’s going to change the world. You need to do something with his musical talent now; you can’t wait. I know he takes music therapy, but you’ve got to get him used to playing with other kids for socialization.” Of course, Billy (and Gena) was right.

Flash forward a few years to the weekend of Friday, January 25 and Saturday, January 26, 2013. My son, so comfortable playing solo (both musically and socially) for so many years, took the stage for his first-ever “School of Rock Fairfield, CT The Who” concert. Not only did he and his bandmates rock the house, but one of their songs, “The Song is Over” was voted “Best in Show.”

Ethan was completely in his element; fans and his fellow musicians were floored that a 7-year-old could have such talent. (Most had no idea that Ethan is on the spectrum). As a special encore, Brian Fox, the show’s musical director, surprised the crowd by having Ethan play Pete Townshend’s acoustic version of “Eminence Front.”

Thanks to a Mann with a plan

Had Ethan’s music been terminated as requested, there is no doubt Ethan wouldn’t be as cognizant, communicative or social as he is today. Here and now, Ethan is more in my/our world than ever. Ironically, it’s been the addition — rather than the removal — of music that has brought Ethan more out of his world and into mine/ours. Maybe, as the 1950s television show said, “Father knows best.” But surely, a mother’s intuition — and a Mann with a plan — trumps that.

An ode to the birthday girl through the eyes of autism
Autism: You gotta be in it to win it
Which exit for autism?