What were on the minds and Twitter feeds of some of our favorite celebrity moms? Kim Kardashian tweeted a picture of her newly popped baby bump, while Jessica Simpson tweets her excitement about her BFF Cacee Cobb’s new pregnancy news. Kendra Wilkinson hints at her own baby news, while Kristin Cavallari rounds out our list of top celebrity mom tweets.

“Well hello there! #PoppedOuttaNowhere!!!” tweeted Kim Kardashian, with a link to a photo of her sister Khloe Kardashian holding up part of her dress to show off her baby bump.

Kim is due in July with her first baby with Kanye West.

“Channeling my inner Carrie Bradshaw,” Kardashian tweeted last week, with a link to a photo of her wearing a white feathered dress.

“I found this cool feather dress and felt it was so fitting to wear running around Paris! I felt like Carrie from Sex & the City when she lived in Paris,” she wrote.

The pregnant reality star also took to Twitter to clear up rumors from her dad’s ex-wife with a series of tweets that read:

“I love being in Paris so I don’t have to deal with the ridiculousness of the US tabloids fake stories week after week!” she wrote.

“So my dad’s ex is selling ridiculous stories again to tabloids! Do not believe it! Sad when people need $ & get desperate. 10 yrs since dad passed & this woman he married  2 wks before he died needs 2 get a job instead of trying 2 destroy families w fake stories,” she continued.

“P.S. that story that my mom beat me & threatened to kill me hahahhahaha! I’d beat her! JK truly laughable! #NOTTRUE. While I’m on my Kanye…lol These ridiculous stories of Khloe are complete BS! She isn’t preggo, she’s so happy 4 me, her & Lamar r perfect. Prob done responding to fakeness for a while but I knew this weeks stories hurt my mom & I will set record straight 2 protect her!” she said.

It must be in the water! Pregnant Jessica Simpson tweeted her excitement that her best friend Cacee Cobb and her husband, Scrubs star Donald Faison, are also expecting!

She retweeted Cobb’s announcement that said the following with a photo of a baby onesie:

“Looks like @donald_faisonand I r going to have a little stormtrooper of our own!” tweeted Cobb.

“Drew Barrymore is such a beautiful new mom. Excited to try out her new make up line Flower!” Simpson tweeted.

Speaking of fashion mogul, Simpson shared her new maternity collection at Motherhood Maternity. “Can’t wait to share my Spring Collection at @MotherhoodMat with all you moms-to-be out there!” she tweeted, with a link to her new collection. 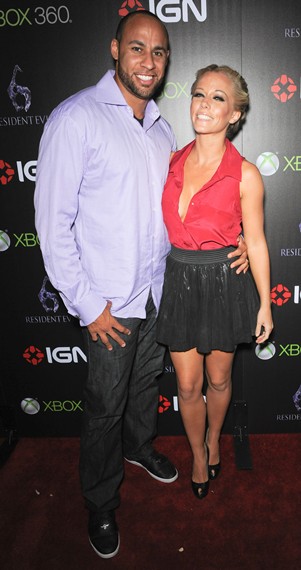 Is sounds like Kendra Wilkinson and her husband Hank Baskett are planning on baby number two!

“What do you guys think about a little brother or sister for Lil Hank?” she tweeted, with a link to a story on Us Weekly with the headline, “Kendra Wilkinson: I Want to Get Pregnant Again in 2013!”

The article quoted Kendra as saying, “Our resolution is to definitely have baby number two,“ the WE TV star told Us Weekly. “Maybe another boy. We’re used to those already.“

She also tweeted her sadness about the death of Hugh Hefner’s longtime secretary Mary O’Connor, who was frequently seen on Kendra’s show, The Girls Next Door.

“I’ll always remember you, Mary,” she tweeted, with a link to her website that talked about her “devastation” about hearing of her death.

“She was almost like a therapist because we could talk to her about anything. When I lived at the mansion I was very close with her. Over the years, she helped me through a lot and was always there for me,” she wrote.

“is yours more normal?” one of Cavallari’s followers tweeted back.

“You’re funny. I’ve never had any work done but thx for thinking that,” she wrote back.

Also on her Twitter feed? “We did the whole tornado drill at our house last night. Woke up the baby and went to the basement while watching the news. Scary stuff,“ tweeted Cavallari, who lives in Nashville with her fiance Jay Cutler.