Even with my mental health history — I was first diagnosed with depression in my late teens — I was still surprised to get prenatal depression only a few weeks into my second pregnancy. It was one of the toughest times of my life. I was delighted to be pregnant, but almost overnight, those feelings of joy were replaced with overwhelming sadness and worthlessness. As well as wrestling with this sudden, unexpected reversal in my emotional state, I had the burden of a huge decision — should I take antidepressants during my pregnancy? — and so many questions I didn’t know where to find the answers to: How was my emotional state going to affect my baby, my ability to be a good mother and the 2-year-old boy I already had?

Related story Bridgerton’s Ruby Barker Opens Up About Mental Health & Hospitalization: ‘I Have Been Struggling’

More: Yes, Kids Can Have Depression Too

“Depression is a treatable condition that responds extremely well to psychotherapy, psycho-social supports and medication. Early intervention supports remediation of depressive symptoms and promotes adaptive and productive function,” licensed psychotherapist Dr. Mayra Mendez tells SheKnows. “Just as postpartum depression requires identification, attention and treatment, prenatal depression requires the same if not more support, as the symptoms do not just impact the mother, but affect the fetus as well.”

Prenatal depression is often overlooked or underreported, says Mendez, largely due to the persisting stigma associated with mental illness. “Women who want to have a baby or are pregnant may not reveal struggles with depression for fear of being criticized, condemned or stigmatized,” she says.

Then there’s the fact that there’s often an overlap between symptoms of depression and those of pregnancy in general: sleeping a lot, lack of energy, difficulty concentrating and changes in appetite. It’s also natural to feel some amount of anxiety concerning the pregnancy, childbirth and parenthood.

This can lead to genuine symptoms of depression being dismissed as part of the hormonal impact of pregnancy. “There may be an attitude of dismissal stemming from stereotypical beliefs that ‘women are emotional,’ especially when pregnant,” explains Mendez.

More: I Was a Teenage Cutter — & This Is What Parents Need to Know

According to Mendez, red flags for mental health concerns during pregnancy include intense and persistent sadness, excessive and unprovoked or unrealistic worry, dramatic and out-of-character eating changes, disruptions in sleep patterns beyond that expected typically during pregnancy, loss of interest in otherwise pleasurable experiences and activities, withdrawal, persistent distress and despair, high levels of irritability, intense and irregular displays of anger, hopelessness, difficulty concentrating, negativity and anticipating doom and a loss of enthusiasm for life.

Just as with postpartum depression, it’s crucial to seek support if you have (or think you may have) prenatal depression. Of course, this may be difficult if you’re struggling to deal with your mood changes yourself and have feelings of guilt about your symptoms, but getting as much support as possible really does make a world of difference — take it from someone who knows.

“The primary coping recommendation is to seek support from family, friends and mental health professionals,” says Mendez. “Talk about your feelings and experiences, share your thoughts and concerns and maintain an open line of communication with trusted people.”

Mendez also recommends consulting with medical professionals for connections to mental health specialists who work with issues of maternal depression and mental health conditions. “Isolation can fuel despair and intensify depressive symptoms,” she says. “Seek help and take comfort in the knowledge that depression can be managed, treated and tamed.”

Sometimes, treatment comes in the form of antidepressants, which don’t come without risks to the fetus. Reported risks include heart defects, cleft lip, spina bifida, autism and ADHD as well as withdrawal from the meds manifesting as irritability, fast heartbeat, restlessness, breathing problems, low blood sugar, muscle spasms and high blood pressure in the lungs. Although the risks are low and the research is inconsistent, that’s still quite a list to be faced with when you’re already struggling and likely to be feeling huge amounts of guilt for spending your days crying instead of celebrating.

Whether or not to take antidepressants for prenatal depression is the right decision is determined on a case-by-case basis. I knew from past experience that antidepressants always alleviated my symptoms, and my doctor (and later a psychiatrist) agreed that in my case, the risks of not taking the meds outweighed the risks of taking them.

While mild to moderate depression may be best treated by therapy, Dr. Gail M. Saltz, a psychiatrist and associate professor at New York Presbyterian/Weill Cornell Medical Center, says medication may need to be considered for moderate to severe depression. Saltz tells SheKnows that the risks of not treating depression during pregnancy include loss of appetite (and therefore nutritional compromise to the fetus), risk of suicide, neglected personal care and the overall impact of depression on the fetus, which seems to correlate with low birth weight.

More: What Is Attachment Parenting, & Is It Too Extreme?

It’s been amazing to see so many parents, celebrity or otherwise, share their stories about postpartum depression over the last few years. We desperately need to see the same happen with prenatal depression. Because depression is depression, whether it happens before or after the baby is born — and only by talking about it can we help to normalize it as a real and serious but ultimately treatable illness. 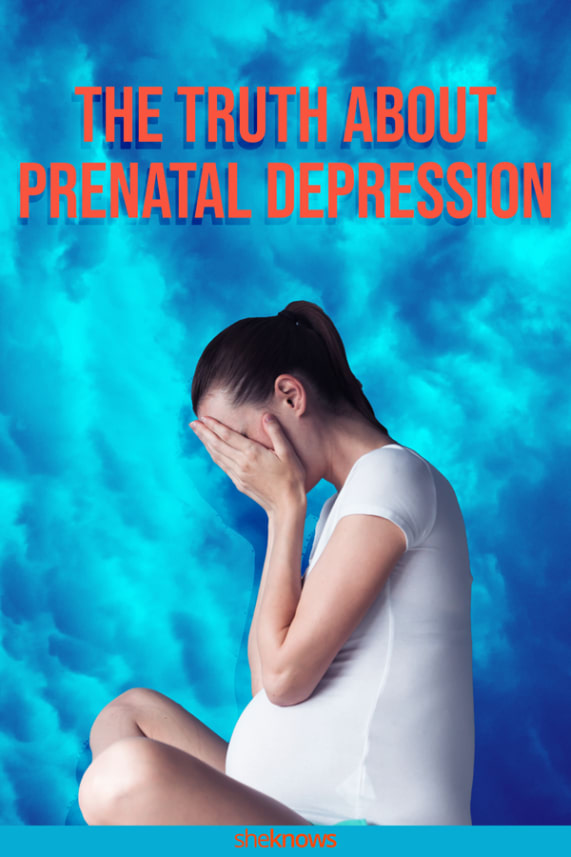