Most moms look forward to ultrasound day — just to get a peek at their little one, or to start planning a nursery when they find out they’re having a boy or a girl. However, some moms worry about the safety of sonograms. 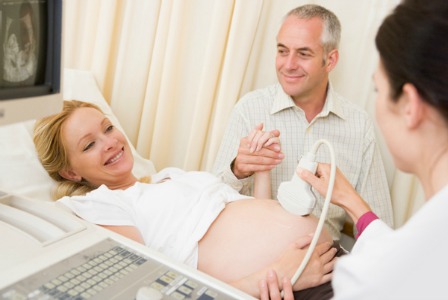 Some parents even pay extra money to “boutique” sonographers for extra footage. But some feel that the jury is still out on the absolute safety of routine ultrasounds in pregnancy.

Sonograms, the pictures that are formed with high-frequency sound waves, have long been hailed as a safe, noninvasive and easy way to get a peek at the inside of the human body. Obstetric ultrasounds, whereby medical practitioners can view the fetus inside a pregnant woman, evaluate its well-being and detect problems, are in routine use today, but some feel that the risks aren’t fully known and moms should proceed with caution.

With the number of ultrasound fetal keepsake photo services popping up around the nation, it’s so tempting to just hop in and get an amazing 3D video of your little one before his birth, but experts don’t suggest it. Although the technology is generally regarded as safe, most advise against its use in absence of a medical need.

According to the American Pregnancy Association, “Ultrasounds are only necessary if there is a medical concern. For women with an uncomplicated pregnancy, an ultrasound is not a necessary part of prenatal care.”

The issue isn’t that there is a known risk for multiple ultrasound exams — the issue is that there may be a risk that scientists haven’t yet uncovered. Most obstetricians order one or two scans per pregnancy at the most — unless there is a true medical need, such as checking for viability in early pregnancy or to check on placental position near the end.

Laboratory studies on mice have shown that some mice exposed to prenatal ultrasound showed neurological damage, and there is actually a form of ultrasound technology (not used on pregnant women) that does have an effect on human tissue. Keep in mind that laboratory studies typically expose the test subjects to medical experiments above and beyond what normal humans experience during the course of an illness or a pregnancy, but it is still a concern for medical professionals who don’t want to push the ultrasound wand too often.

Your doctor will likely opt for at least one ultrasound, near the midpoint of your pregnancy, to make sure that everything is ”A-OK” and on target. Many moms get an early scan for dating purposes, and others also get one as part of an early genetic screening. Most practitioners will keep the scans short, and while you can often find out the baby’s sex at 20 weeks or even a little earlier, they usually don’t linger much more than they need to.

If you can resist, save your peeks for your medically-indicated ultrasounds. If you have a medical need, your physician knows that the need for information from the scan outweighs any potential risks. The FDA urges moms to avoid ultrasounds that take place without medical personnel present, such as at stand-alone ultrasound businesses — not because they’re dangerous, but because there may be risks that we just don’t know about yet.

Do sonograms cause autism?
Sonograms from the comfort of your own home
What to expect from the 20-week ultrasound