Holly Robinson Peete’s love for travel runs deep, thanks to time spent traveling internationally as a teenager. Now, as a mom herself, Holly shares her love for international travel with her own children, with other kids from across the country and with SheKnows readers. 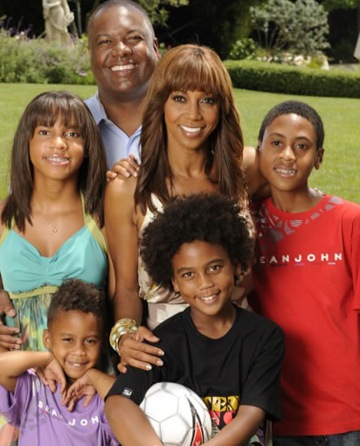 Find out why Holly is so passionate about helping kids have the opportunity to travel abroad, what her own family loves to do when they get away and even her hilarious must-have travel item!

A lifelong love of travel

For Holly Robinson Peete, celebrity mom to four children, ages 8 through 15, including a set of teenage twins, her love for international travel started long before she was a celebrity, or a mother. As a 16-year-old, Holly attended an exclusive summer program in Switzerland, where she met other teenagers from all over the world, including Syria, Spain and Russia. Her travels continued as a college student, spending a year in France, which was both the “best and the hardest” year of her life, as Holly recalls. “I was determined to come back fluent. I wanted to be a French girl.”

Traveling with the Robinson Peete family 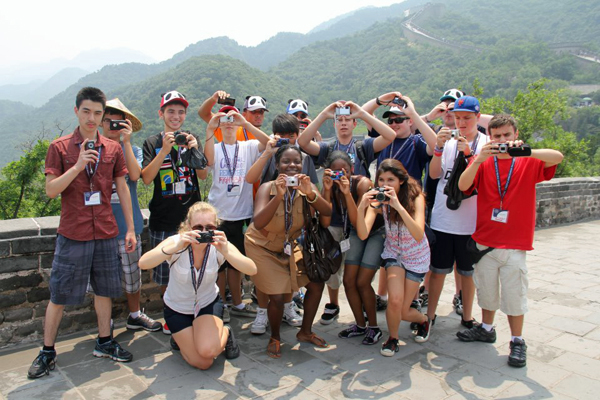 Here’s what we’re all dying to know… What does Holly’s family enjoy when they get some time off from their busy lives to travel? Something adventurous? Relaxing? A little beach time? A dose of culture? All of the above, according to Holly!

“They’re seasoned travelers,” Holly says. “Every trip we take, we try to integrate elements of culture and service into our vacation time. When we traveled to the Bahamas recently we helped organize an autism-focused event for the people who live there. Our kids need to learn to develop empathy and getting them out into the world early in their lives helps them do that.” Holly shared one of her favorite quotes by Marian Wright Edelman that seemed to hit the nail on the head: “Service is the rent we pay for being.”

Traveling with four kids, we were certain that Holly must have a few travel tricks up her sleeve. Her family’s must-have travel item? The TravelJohn Jr! “It goes on every trip with us,” Holly laughs. “And it comes in handy every time!”

Looking for more tips for your upcoming family travel? Start with the Top travel toys for kids >>

From the other side of the travel coin

This summer, Holly will be taking on the role of worried, fretting mother, as two of her children, Ryan, age 15, and Robinson, almost 11, will travel across the world by themselves with the People to People Ambassador Programs! Holly’s daughter, Ryan, will be traveling to India.

“I told her she had to go with her gut,” Holly shares about Ryan’s decision to choose India. Robinson, Holly’s son, will be traveling to Australia during his time with People to People. “In our recent trip to Fiji, we met some Australian families and he became obsessed with going there.”

Holly also shares that after her experiences traveling as a teenager and college student, she couldn’t wait to do the same for her own kids. And, when we asked if she was worried about sending her kids to the other side of the world, even with a fantastic youth-focused travel program, such as People to People, Holly expressed that she wasn’t too concerned. “Now with Facetime and Skype, there are so many more ways to keep in touch. Plus, we’ll be busy with our two other kids who will still be at home while [Ryan and Robinson] are traveling!”

Giving the gift of travel to other children 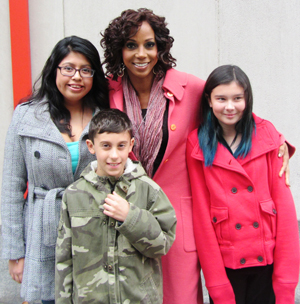 Holly is pictured with kids from NJ who were affected by Hurricane Sandy and who have already won spots in the program.

Holly Robinson Peete’s partnership with the People to People Student Ambassador Program seems only natural and she couldn’t be more thrilled to give more deserving kids the chance to travel abroad and see the world with their young, fresh eyes.

“Travel is key to development,” Holly shares with a twinge in her voice that is completely heartfelt. People to People is a travel program designed for students as young as fifth grade, extending through programs geared for college-aged students who have a desire to travel internationally. Holly’s Holiday Global Giveaway (entries accepted through January 31, 2013) is giving two kids the chance to travel the world through People to People, with the first step being the toughest choice of all — which continent they’d like to travel to! Holly comments that if she were given the choice now, as a student, she would choose Italy, with China as a close second pick.

Read more about the HollyRod Foundation and the work they do to support families living with autism and Parkinson’s Disease.

11 hrs ago
by Emilia Mense Caby