What were on the minds and Twitter feeds of some of our favorite celebrity moms? First Lady Michelle Obama unveiled her new Twitter handle — and her new hairdo! New mom Adele tweets her excitement at the Golden Globes, while Kim Kardashian chats maternity style. Nicole Richie and Busy Philipps round out our list of top celebrity tweets of the week. 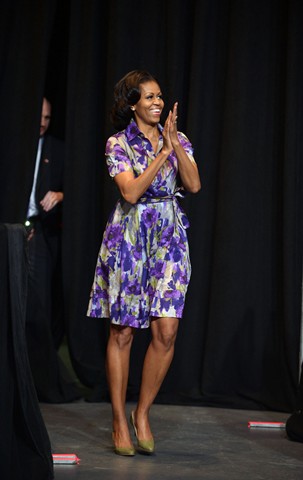 In honor of Michelle Obama’s 49th birthday, the First Lady revealed her new Twitter account — @FLOTUS (which stands for First Lady of the United States).

At recent count, she already has over 48,000 followers and is following 15 people. Her first tweet read:

Her next tweet unveiled her new haircut with bangs!

“The First Lady just met with Inaugural citizen co-chair David Hall ahead of #MLKDay of Service,” the tweet read, with a link to the following photo.

New mom Adele picked up Best Original Song at the Golden Globe Awards for her work on James Bond with her song “Skyfall.”

It sounded like the singer, who gave birth to her son 12 weeks ago, was a little starstruck!

“Oh my god I feel like Meryl Streep!! Thank you,” she tweeted.

Her acceptance speech was just as colorful, as she said, “Oh my God. Oh my God. Honestly, I’ve come out for a night out with my friend Ayda. We’re new Mums. We’ve literally come for a night out, I was not expecting this.”

No word on Adele’s Twitter feed as to the name of her son. This mum… is staying mum!

It sounds like newly pregnant Kim Kardashian is enjoying this new phase in her life. “Looking up baby websites with @jOYCEBONELLi…oh how times have changed! I remember when we were single roomies just a few years ago!” she tweeted. “I love life!”

Kardashian, who is reportedly around 14 weeks pregnant (due in July!) with Kanye West’s baby, is having fun dressing her new pregnancy curves.

“Chic, effortless and comfy!” she tweeted, with a link to this photo at the airport.

“I have never ever in my life overslept! But I was supposed to leave for my 7.40am flight to NYC at 6am and my home gate rang at 6.30am!!!!! The driver was asking where I was! I have never had my alarm not go off. I rushed to the car, thank GOD I was packed. I didn’t even brush my teeth or wash my face! I bought a toothbrush into the lounge and brushed my teeth!” she wrote.

“Style Snapshot: I love this drapey look! So chic. I’m wearing a Margiela dress and an Ann Demeulemeester jacket with Alexander Wang boots. So easy and effortless and COMFY!”

She also addressed the rumors that she and Kanye just purchased a $4.5 million dollar home in Bel-Air.

“So funny when you see magazines & photos online of this new home that’s supposedly mine but its the wrong house! LOL” she wrote.

Nicole Richie is one of my favorite celebrity moms on Twitter because she is pretty darn hilarious.

“I’d hit it,” she later wrote, with a link to a photo of her husband Joel Madden.

“2012 was a year of learning the importance of family loyalty… via The Real Housewives of New Jersey,” she tweeted.

And one more gem:

“Telling people you’re on a juice cleanse is a perfect way to make sure everyone is visualizing you having diarrhea.”

“I wonder if Michelle Obama is like me and INSTANTLY regretted cutting those bangs??” tweeted Cougar Town star Busy Philipps, who is currently pregnant with her second child.

Crafty mom alert! “I have to make a dress out of recycled materials for my kid’s preschool’s Project Runway like assignment. I’m currently fusing plastic bags,” she wrote, saying she will “post a pic of the finished dress.”

“Flying back to LA today, using SO much hand sanitizer & have shoved SO MUCH Aquaphor up my nose, if this flu gets me, I deserve it…,” she tweeted, followed by:

“Guys, Jeff Bridges is on my plane doing stretches in the front galley. The Dude is stretching it out! I love him! This is amazing…”