Have you ever looked into the eyes of a teenager with Down syndrome, then listened to — and really understood — what it may feel like? To some, that idea alone is terrifying. 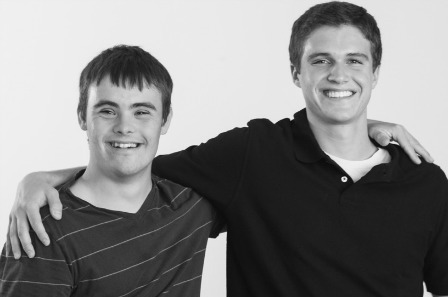 This new film helps break the ice on what producers hope will be the beginning of real conversations, real understanding and ultimately, acceptance.

Just Like You introduces viewers to three teens who happen to have an extra chromosome — and the desire for their peers to view them as just kids, just like you.

The short film seeks to “open hearts and change perspectives because, ‘when you have the knowledge you understand, and when you understand you can accept that kids with Down syndrome just want to be treated like any other kid, just like you.’”

Available for purchase and on YouTube, Just like You was created by the 501(c)(3) nonprofit by the same name (Just Like You), which makes films to answer kids’ questions about unique circumstances. This film was made in collaboration with the Down Syndrome Guild of Greater Kansas City “with the hopes it will be utilized as a tool by parents and educators to open the door to inclusion, acceptance and friendships,“ according to the film’s website.

The Down Syndrome Guild of Greater Kansas City and filmmaker Jen Greenstreet partnered to release the film, Just Like You – Down Syndrome, on October 22, 2012.

Elyssa, Rachel and Sam are teens who happen to have an extra copy of the 21st chromosome. That means while most people have only 46 chromosomes, people with Down syndrome have 47.

The three look straight into the camera and — peppered by moments of delight, amusement and pride — share personal stories to help viewers better understand Down syndrome and why they wish to be treated just like any other kid.

“Each of our stars has their own talents, characteristics, strengths and challenges,” the organization explains on its website. “Down syndrome is just one part of who they are and this film identifies how to handle and accommodate differences while celebrating the many similarities our friends with Down syndrome have with their peers.”

Underscoring Elyssa’s, Rachel’s and Sam’s stories are perspectives shared by their best friends, teens who do not have Down syndrome. In matter-of-fact, nonplussed voices, Bretlyn, Savanna and Bobby — typically developing teens — talk frankly about what it means to be friends with someone who has Down syndrome.

“Kids are curious, and having a classmate with Down syndrome raises questions,” Just Like You explains. “When questions are left unanswered, it can lead to fear of the unknown that may cause kids to ostracize, judge their classmates, lash out or bully their peers who are living with the condition.”

In a short 13 minutes, the film covers some of the challenges individuals with Ds face, including low muscle tone, poor memory and trouble communicating. Just as frankly, all six teens address what a classmate or potential new friend can do to learn more and understand better about what it means to have Down syndrome.

“Slow down,” all six emphasize, explaining that it may take a person with Down syndrome a little extra time to finish talking, but being patient is worth it.

“Because I have important things to say,” Sam says with a quick grin.

The film also touches on behavior, and how perceived differences may actually be what a person has in common with someone with Down syndrome, from math frustrations to just having a bad day.

Good moods or bad moods aren’t because of Down syndrome, the teens explain. “It is just part of what makes me who I am,” Sam says firmly.

The film also describes why the friendships between the teens work, with all six supporting each other during life’s ups and downs.

In 13 minutes, Just Like You puts real faces and names to the simple truth that “some kids have Down syndrome. But they’re still just a kid. Just like you.”