Is it croup? Is it whooping cough? Is it just a plain old cold? Sometimes it’s hard to tell. Use this guide to help narrow down the symptoms and sounds of your child’s cough, including detailed information on when her cough could warrant a trip to the doctor. 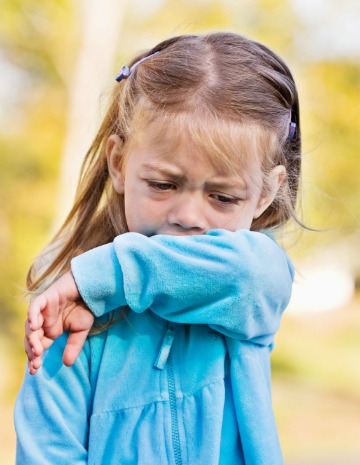 Sometimes parents are forced to moonlight as medical detectives, especially during cold and flu season. One of their biggest clues, the cough, can often be one of the most difficult to decipher.

While a cough can certainly be annoying, it can also provide valuable insight to the state of your child’s health. Like physiological musical notes, coughs can present themselves in various ways. They can gurgle, scrape, echo or wheeze. Some are intermittent while others persistent. Every cough is unique, which is why parents are often left perplexed by the cause. “A cough can indicate many different things,” says Michelle Terry, M.D., pediatrician at Seattle Children’s Hospital. “Chronic cough is common among patients developing asthma symptoms. It can also represent a foreign body — a piece of food, candy or nut — or even a small building block toy in the airway.”

How is your child’s germ etiquette? >>

Whooping cough, or pertussis, is a big concern for parents that presents itself in a distinct way. “Pertussis, also known as the ‘100-day cough,’ is best described as a series of coughing fits that continues for weeks,” says Terry. “Pertussis can cause violent and rapid coughing, over and over, until the air is gone from the lungs and you are forced to inhale with a loud ‘whooping’ sound. In infants, the cough can be minimal or not even there. They may even develop life-threatening pauses in breathing — apnea.”

The sound of some coughs can just make you cringe. If that’s what you hear from your little one, you may be dealing with croup. “Croup is described as a ‘barking cough’ or a cough that ‘sounds like a seal,'” says Terry. “It comes on quickly and children may have trouble managing their secretions and drool quite a bit. It is caused by a variety of viruses — particularly parainfluenza.”

Find out: Why do kids get sicker at night? >>

Colds are a part of childhood (and adulthood for that matter) and are often difficult to avoid. Coughing comes with the territory when the cold hits but it often sounds very different from that of pertussis and croup. “Cough due to the common cold — rhinovirus and other viruses — is usually associated with sneezing and mucous production,” says Terry.

Find out about cures for a kid’s common cold cough >>

Even experienced moms can be thrown off by some coughs and since most moms aren’t doctors, a visit to the pediatrician is sometimes necessary. “Any cough that presents with shortness of breath, wheezing and/or extreme tiredness should be evaluated by a medical provider with a same day appointment,” says Terry. “Also a persistent cough associated with high fever may indicate pneumonia. A chronic cough may be a variant of asthma or represent seasonal or environmental allergies.” Same day appointments come with the territory when you’re a pediatrician so pick up the phone if the cough warrants a visit.

6 Ways to protect your child from winter cold and flu
Teaching healthy habits to elementary students
Is your child living a healthy lifestyle?

23 hrs ago
by Hannah Van Sickle