After each miscarriage I suffered, I felt a burning need to do something — or rather have something — to remind me and to acknowledge where we’ve been. I needed something to commemorate the tears and heartbreak; a way of memorializing five lives that never came to be and what the loss meant to me. 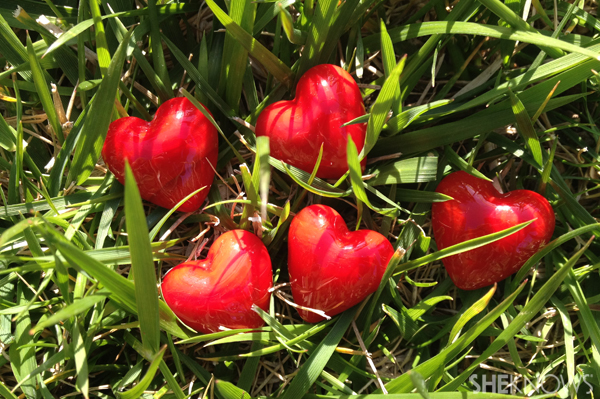 The loss is great and the grieving can sometimes last forever when you’ve had a miscarriage. I should know, I’ve had five.

One day there’s a heartbeat and the next there’s not.

With each loss, I became sad and depressed. I wrote about my feelings, cried with my husband, read about how others had suffered, met with my counselor and support group, discussed what went wrong with my RE and slowly but surely gained enough strength to move on to the next cycle.

But the pain remains and there was now another longing, not just the longing for a child, but a longing and a necessity to memorialize the losses.

I bought the first bright red glass heart just before we started our last round of IVF, a process that we were certain would work. I carried it with me everywhere, in my pocket or purse, always within reach. I carried it for luck and love, but most of all for hope.

When the process didn’t work, I wanted to throw it against the wall and watch it shatter, like my own heart had.

Instead, I placed it in a box that was once my mother’s on my dresser and there it stayed.

What could have been

I have since added four more just like it because it has taken on a different meaning: What could have been.

I have learned that it’s important to grieve for the lives and the ’what could have beens.’ It’s part of the healing process and I realize that the emotional impact of a miscarriage can and probably will take longer to heal than the physical impact.

It is agonizing knowing those hearts are there, but they represent a very long and grueling journey that we have not yet completed.

Holding on to hope during infertility
Infertility: With a little help from your friends
TTC: I quit