Those of us who love horror movies or television shows know the pain of wanting to watch what we want, while at the same time shielding our kids from violence, sex and gore. But what are the real risks of exposing our kids to R-rated material at an early age?

Related story 7 Coronavirus Myths That Could Hurt You & Your Family 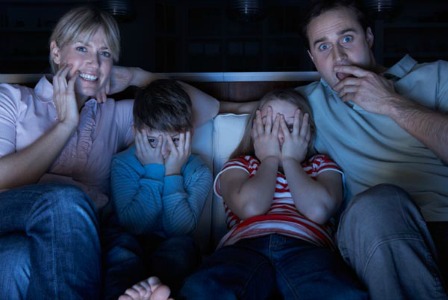 Horror movie buffs that become parents soon face a conundrum once their child becomes aware of what’s happening on the screen — small children, even toddlers, are often affected negatively if they see something scary on TV.

Scary movie viewing must then take place once the kiddos are in bed, but what happens if they catch a glimpse of the scary goings-on anyway?

Small children do not have the ability that adults have to distinguish fantasy from reality. Images on the television can be very real to them and can provoke physical reactions in addition to giving them nightmares.

“Adults feel their own pulse rates quicken when they view a violent movie, but are able to place the experience in perspective,” reports Susan Glaser, an educational psychologist and author of two books on parenting. “A child — and even the young adolescent — does not have the ability to do that. For the young child, the line between fantasy and reality is blurred. They may be able to say, ‘It’s not real,’ but how they feel and how they react often belie that statement.”

Susan ran a multi-site nonprofit care center for children in Cleveland, Ohio for 15 years, during which she spent quite a bit of time in parent guidance. She was able to tell which children had been exposed to violent television or films by the child’s behavior. “The reactions ranged from increased aggression (often imitating exactly what they had seen) to toilet accidents to increased separation anxiety,” she explained. “The images that children see in videos and movies are not static — they are meant to arouse strong feelings with vibrant visuals and dynamic sounds.”

There has been much research on the effects of frightening or violent programming on young children, with the majority pointing towards many kids acting out the actions or events.

“I believe they do this to gain some control over the confusing and disturbing material,” said Susan. “It is their way of trying to integrate it into their lives.”

Scary or violent TV can lead to a number of negative behaviors and long-term consequences, such as fear and insecurity (the child thinks something bad can happen to him), regression in behavior and an increase in aggressiveness. “Each exposure to violent images numbs children to the brutal reality of guns and gore,” said Susan. “The younger the child, the more difficult it is to separate that real guns kill while someone on the screen who ‘dies’ can live to appear in another movie.”

Movies and television have a rating system that helps parents make decisions on what is appropriate for their child to view. Every parent has different levels of comfort — for example, an occasional curse word or short fighting scene may not be a huge deal for the parent of a 12-year-old, but it may be a deal-breaker for another parent. A really good resource is the Internet Movie Database (imdb.com). Most movies have section titled “Parents Guide,” which outlines any potentially objectionable material (for example, view the Parents Guide for The Hobbit: An Unexpected Journey).

If you keep your child’s maturity level in mind as well as completely exploring the content of the movie or show you want to watch, you’re better able to make the best decision for your family.

More on kids and media

Kids and TV: How much it too much?
Kids and TV: Break the addiction
Mom vs. Dad: The TV debate

7 hrs ago
by Racheal Pulver