What was I supposed to do when my then 6-year-old daughter came home from school one day telling me that the boys in her class had insisted that girls weren’t supposed to play with Legos? 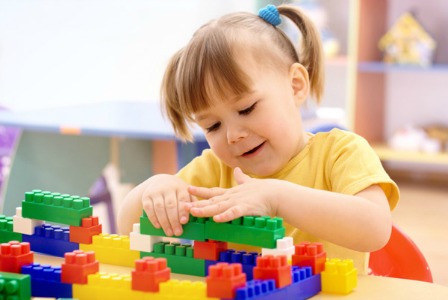 With two daughters who have never put gender labels on toys or activities — from superheroes to dolls — this shattered me.

The girl who played with Duplo’s instead of dolls

I remember being pregnant with Janie, nearly 9 years ago now, and being so frustrated that everything available for girls was just so, well, girly!

While I was certainly thrilled that our first child was going to also be our first daughter, I was determined to raise a little girl who wasn’t exposed to only pink and ruffles and Barbies. As a girl who always fell somewhere midway between the super girly girls and the tomboys, I wanted the same for my daughter — to be able to wear pink while taking names on the soccer field or be the only one who had to put her hair in a ponytail during physics labs.

As Janie grew, we found that despite exposing her to toys and interests that fell on both sides of the gender divide, she seemed to gravitate toward what most people would labels as “boy” activities (and that were often pulled from the “boy section” of the store) — building blocks, trains and Legos, rather than baby dolls, princess dress-up clothes and tea parties.

At the least, we were fascinated by her choices and at times, I admit that I tried to push more traditional girl toys and activities on her, in hopes that she would connect better with other little girls her age. And, in hopes that she would never face a moment like she did in kindergarten, when the boys in her class shunned her at the Lego table, telling her that girls weren’t supposed to play with Legos.

It doesn’t matter if you have girls or boys, you’ll thank us for this. Never step on another stray Lego again >>

Parenting in the moment

It’s one of those parenting moments that takes your breath away. Hearing from your own child that she was excluded from an activity is heartbreaking enough, and then, furthermore, to find out that she was excluded because of her gender? I had a hard time suppressing my emotions — I felt like I wanted to cry and scream at the same time. But, in the moment, with Janie there in front of me, telling me this story in her nonchalant 6-year-old way, I attempted to channel all of the best parenting advice I’d heard over my life as a mother and tried to find out how Janie felt about being excluded from playing Legos because she was a girl.

To my surprise, she wasn’t as bothered about it as I was. Janie expressed to me feelings of embarrassment, more than anything, because the boys said it loudly and in front of the entire class. But to my delight, she also expressed confidence. She reminded me, as she went about eating her after-school snack, that she was better at building than all of the boys in her class and that someday, she would just bring in something that she had created at home and they would make this face (insert look of shock on her cute little face here!) and ask her for tips about how to make their Legos better.

Another look at life with daughters in Raising girls: The “I’m fat” conversation >>

Preparing her for an uphill battle

Legos is only the beginning.

As a woman who was born in the early 1980s, I’ve grown-up and lived in a world that has become progressively more open-minded and more important, supportive, of women being equals in the workplace, in the home and in life, and I hope that my children experience the same progression.

However, I’m not blind to the fact that, just like the little boys in Janie’s class, there will be moments when my girls will face challenges and roadblocks, simply because of their gender. I hope that by teaching them, throughout their lives, to be proud and confident as women who can accomplish whatever they choose to, they will learn to see not just through the lines of gender, but past them as well.

It goes both ways

As I was chatting about this topic with another mom, she reminded me that the gender stereotypes go both ways. Moms of boys who love to play with toys that are targeted for girls experience the same issues, just in reverse! The best solution, when it comes to children? Treat them as individuals first, respecting whatever toys or activities they choose to make their favorite!