Dr. Brian G. Skotko has all the character traits I look for in an advocate. His family encouraged banter as a sport. He earned a medical degree from Harvard. He has a family member with Down syndrome (Ds) and a mother whose teaching career taught him the more important things in life should be laminated. 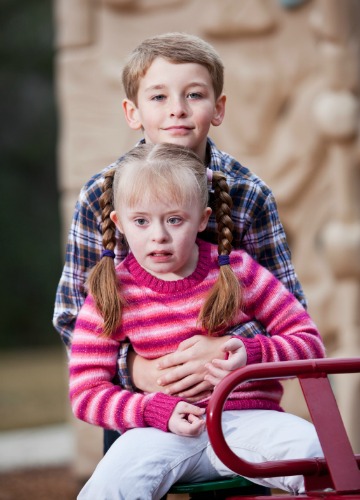 As a parent of a child with Down syndrome, I give thanks that he’s “one of us,” or as he put it, “in the club.”

Dr. Skotko’s credentials are impressive, but his personable demeanor and pointed sense of humor set him apart from many in the medical community.

He has a younger sister, Kristin, who has Down syndrome, so he is walking the walk. Over his lifetime and career, he has interviewed more than 3,000 brothers and sisters of individuals with Ds.

He has dedicated his life to becoming what can only be described as The Sibling Whisperer.

A board-certified medical geneticist and co-director of the Down syndrome Program at Massachusetts General Hospital, in Boston, Massachusetts, Dr. Skotko also visits communities with active and blossoming Down syndrome advocacy groups. His goal is to share what he’s learned after experiencing life as a sibling of a younger sister who has Down syndrome, as a researcher and as a member of the medical community.

Why does that name sound familiar?

His two-hour presentation to the Down syndrome Association of Greater Charlotte (North Carolina) included a PowerPoint stuffed with research — yet starved of his most engaging personality traits: Humor and empathy.

For each morsel of data he delivered, what he offered emotionally perhaps was more impactful. To a room full of parents who have a child with Down syndrome in addition to one or more typically developing children, he offered permission to ask tough questions and acknowledge tough answers.

As a bonus, his dry, honest perspective added refreshing levity to what often is an overwhelming discussion.

He recounted teenaged trauma from chasing his sister across the stage of a major Cleveland theater.

He poked fun of his obsession with data points, which he used to justify spying on his sister.

Best of all? He gave us down-to-earth talking points for moments I once dreaded (OK, I may have broken into a sweat just thinking about them) but now welcome with relief because I feel prepared.

I’m talking about those times when our “other” children — the ones who learned to crawl, walk and run as simply as they learned to breathe — muster the courage to ask questions we’ve been expecting, those we’ve been dreading and those no one ever anticipated in any workshop, anywhere.

“When [typically developing] children ask us a question [about their sibling with Ds], they’ve already thought of that question for days in advance,” Dr. Skotko explained. “Whatever question you get, it’s really a gift.”

While embracing the question is the first step, pausing is the next, he advised. “Ask yourself, do I need more information [before I try to answer this question]?” If a young child seems to be asking a highly philosophical question, it’s more likely he has a very specific question but may lack the appropriate vocabulary to convey his thoughts.

Vicki Vila has a child with Down syndrome and attended Dr. Skotko’s Charlotte session. She’s an articulate, engaging writer who blogs partly “to help others,” she writes. At Dr. Sotko’s presentation, she sought help for the right words at the right time, and his ice-breaking activity spoke to her.

“I loved when he had everyone call out the first words that came to mind when they thought about their own [typically developing] siblings,” Vicki said. “There was a mix of positive and negative, but the first four were negative: Brats, bossy, pain and annoying. He said that put us square with the rest of America; that most groups, when asked, think of negative words first.”

Vicki’s ’aha’ moment was when Dr. Skotko flipped the scenario to share what happens when he asks the same question of children who have a sibling with Down syndrome.

Those with siblings who have Ds listed positive words first, Dr. Skotko shared.

“This made my heart lift,” Vila said. “It was simple yet very profound.”

Another difference emerged consistently with the “first word that comes to mind” activity, Dr. Skotko shared: Guilt. Siblings of those with Ds reported feeling all the same emotions as a sibling of a typically developing child, but each negative emotion was quickly followed by a nagging sense of guilt.

They want to hear, “It’s OK to outpace your sibling,” Dr. Skotko said.

Up next: More from Dr. Skotko