We drive or walk our kids to school each day and cheerfully wave goodbye, expecting them to be safe and sound until the release bell rings. But how do we know our child is safe at school? 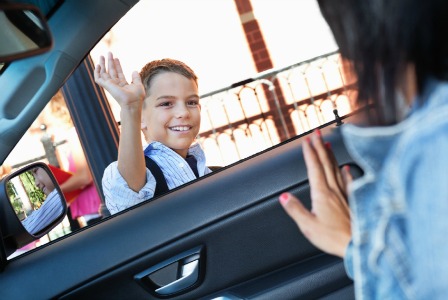 What measures do some schools have in place to ensure the safety of their students? Opinions vary and security measures currently in use are vastly different.

School should be a safe place to send our children each day, but lately many parents are questioning exactly how safe their child’s school really is. In the wake of the tragic shooting spree in Newtown, Connecticut that left 20 children and 6 staff members dead, how do we really make sure our schools are safe?

One of the most popular solutions being debated is the addition of armed guards to all schools. One-third of American public schools nationwide — even before the Newtown tragedy — had an armed guard or police officer present, according to the National Center for Education Statistics. Many high schools already have a uniformed officer on site every day who patrols campus, provides a visual reminder to students to keep their behavior in check and assists in disturbances when needed.

The idea of posting armed guards at elementary schools has created quite a stir. When students returned to elementary and middle school classes after winter break in suburban Marlboro, New Jersey, an armed police officer stood on duty in all eight of the town’s kindergarten through eighth grade schools. Mayor Jonathan Hornik says, “We could have done nothing and then hoped that something didn’t happen — but hope is not a solution — or we could have taken action.”

Executive director Wayne Blanton of the Florida School Boards Association is pushing for an increase in funding school security that will cost more than $100 million. “Some of the districts have put uniformed officers already in elementary schools and that costs a lot of money,” he says. “But the safety of our students is the number one priority of our public schools and we’re going to do everything we can to make sure our schools are even safer than they are now. I will tell you, it’s going to be expensive.” Funds would pay for more school resource officers and some security improvements in existing buildings.

Check out these school safety measures every parent should take >>

How does school front office personnel know who is safe to allow on campus? Requiring visitors and volunteers to sign in is smart, but school offices are bustling with activity — especially first thing in the morning. Check-in policies become more relaxed when campus visitors are familiar faces, and school personnel often just wave them on through. The district in Marlboro requires campus visitors to swipe identification cards through a check-in kiosk, made by LobbyGuard. This device stores the names of known felons, registered sex offenders, parents with a restraining order or suspended students who are not allowed on campus. Implementing stricter security measures in the front office helps deter people who don’t belong from trying to gain access to campus.

Have you seen these apps that help keep your kid safe? >>

School security at the front gate is one thing — what about the safety of your child once she’s in her classroom?

“We’re looking at how schools are constructed and looking at some other safety features,” shares Blanton about the Florida School Boards Association. “Some of the teachers have told us they cannot lock their doors from the inside. Maybe that’s something we need to look at. Maybe we need a different type of glass. Maybe we need panic buttons in classrooms.” He says that there are a lot of things that can be done right now that cost very little to help improve safety measures in the public schools.

Keeping our children safe while at school is a major concern of parents. Find out about what your school has in place for safety measures, but don’t expect the principal to share everything. In order to have an effective security policy, some elements need to be kept secret from the public. Teachers, administrators and parents all need to be vigilant and work together to keep our kids safe.

More on your kids at school

Tips for saving money during the school year
Keeping your kids on healthy diets while at school
Teens and risky behaviors: Violence at school

13 hrs ago
by Bonnie Gibbs Vengrow