It seems innocent enough — a kiss on the playground — but there’s something about it that makes my heart wrench as a mom of two girls. 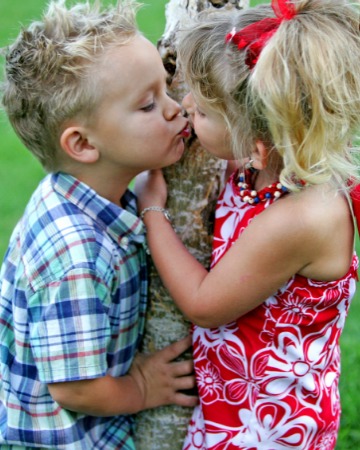 When our kindergartener told me that a boy was trying to kiss her at recess, I quickly realized that we needed to take a stance on playground kissing.

I know it seems so silly to be so concerned about an innocent little playground kiss; it even makes me giggle a bit to share it with other moms, because in reality, Janie was only 6 (at the time, she’s now 8) and the kiss was surely just that — a sweet gesture from a little boy in her class who wanted to express how he was feeling about her. At first, I hardly made a fuss about it when she told me — in fact, I smiled a bit to myself, recalling my own first kiss (I was a bit older — fifth grade, but it was also a smooch of the recess variety) and having a bit of a “here we go” moment, realizing that we’d suddenly been launched into the world where little boys and little girls were no longer playmates, but members of the opposite sex. 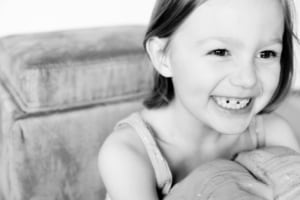 It wasn’t until later that evening that my feelings about her potentially being kissed on the playground sunk in. I felt overwhelmed with emotions — that I wanted her first kiss, even just that little peck, to be something that she really remembered and that as a kindergartener, she was too young for it to mean something.

I also wanted to teach her that she was in control of her own body and that if she didn’t want to be kissed by this little boy (she seemed pretty indifferent to it, honestly), that she had the right to say so. But, I found myself wanting to tell Janie even more than that — I wanted to tell her that she just wasn’t old enough, that it wasn’t time yet, that she wasn’t allowed to kiss people or be kissed on the playground. I wanted to protect her from the opening of Pandora’s box that I saw an innocent kiss leading to. I realized that it was crazy and that a kiss between two kindergarteners wasn’t the fast road to a staring role on MTV’s Teen Mom, but in my eyes, in that moment, it was all the same.

The conversation I had with Janie a couple of days later, after I had the chance to think things through a bit, and to chat with some of my other mom friends about how to work through the situation, helped settle me a bit.

I was pleasantly surprised to hear Janie, in her own 6-year-old voice, reiterate everything that I had been feeling — she wasn’t any more ready to launch into the kissing scene than I was and she candidly told me how she felt about kissing, letting me know that the only people she wanted to kiss her were Mommy and Daddy and sometimes her sister at bedtime. I let her lead most of the discussion, adding in a prompt or two, such as, “How would you use your words to tell someone that you don’t want them to kiss you?” It was age-appropriate and seemed to both satisfy her curiosity and mine about the topic. By the end, Janie seemed to understand that her dad and I felt that kissing should be saved for when she was older — “Like, when I’m married or when I’m old enough to buy a car,” she told me — and I felt as if we’d survived the first of many conversations such as this with our girls.

On the other side of things

While I was busy looking at it from the side of a mother of a girl in the situation, it took me a moment to realize that there is another perspective to this story — the side of the mother of the little boy! I couldn’t help but ask a mom friend who has two boys, both of who are a bit older than Janie, what she thought about kissing on the playground.

“We’ve actually been on both sides of this situation,” she told me candidly. “I’ve had one son who has been the kisser and one son who has been the kissed over the years — both times on the playground at school.” She continued to tell me: “It’s funny because in both cases, I heard about it from my boys and it has started some interesting conversations in our house about respecting women, privacy for their bodies and their own self-esteem/body image. I’d say that as a mom on the boy side, I encouraged my sons to use their words to express how they were feeling to their friends — both boys and girls.”

What does your daughter think about her own body? Raising girls: The “I’m fat” conversation >>

The best lesson, as a mom, that I found in this situation, was that keeping the communication lines open with my daughter about her relationships — both now and moving forward — is so important. Although I wasn’t thrilled about the thought of her getting smooched on the playground, I wanted her to feel like she could tell me without being punished or scolded for how she was feeling or how she reacted.

How have you dealt with the kissing issue with your young child? Tell us about it below!