Firearms and gun ownership are controversial topics on which everyone has opinions. Following record Black Friday gun sales and the recent concern over Second Amendment rights, plenty of people are arming themselves and teaching their children about firearms in the process. 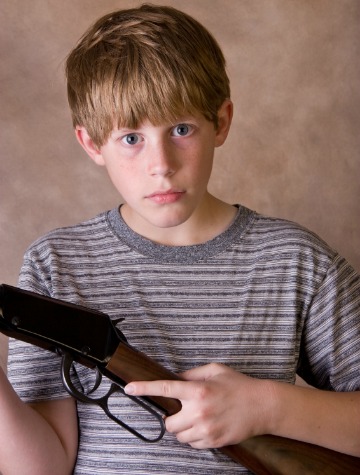 Gun safety is a given if you are one of the millions of Americans who owns a firearm. But, even if you aren’t on board with owning a gun, knowledge of gun safety can still be invaluable.

Firearm-related topics are often polarizing, but regardless of how you feel, firearms education is not the responsibility of gun owners alone. If you have a gun and/or a child, it’s important to learn about gun safety. “Many parents think that because they don’t have guns in their homes that it’s not important to educate their children,” says Tina Francone, an NRA certified instructor, mom and owner of Straightforward Shooting, LLC. “Federal statistics show that there are guns in approximately half of U.S. households. Your kids may come in contact with a firearm at your friend’s home or their friend’s home.” Even if you are a staunch anti-gun advocate, there’s always a chance that your child will see a gun at some point. Will she know what to do?

Some parents may be inclined to simply instill fear in their children when it comes to firearms or demonize weapons in general, but this tactic could easily backfire. “Just telling your kids ‘stay away’ or ‘don’t touch’ isn’t particularly effective,” says Francone. “Kids are naturally curious, and a frank and open discussion helps to demystify them.” As soon as a child is old enough to show an interest in guns or understand media coverage of gun-related topics, parents should start a discussion.

Read more: Do you ask other parents if they have guns in their homes? >>

Without engaging a child in a calm and educated discussion about gun safety, pop culture will fill the void. Violence in movies, on television and in video games can give kids a tremendously skewed perception of guns. “Often times, actors are ‘shot’ and reappear — without injury! — later on in the program,” says Francone. “This gives the illusion that being shot either doesn’t hurt or doesn’t pose deadly consequences. Nothing could be further from the truth.” Educating a child about gun safety doesn’t necessarily foster an interest in shooting a gun but rather instills a healthy respect for firearms.

Find out how celebrities respond to national gun control debate >>

According to Francone, at the very least, kids need to learn what to do if they find a gun:

Some parents are understandably uncomfortable discussing gun safety with their children, often because they were never taught themselves. In such cases, a respected professional can bridge the gap. “An untrained adult can be just as dangerous as a curious child,” says Francone. “The NRA’s Eddie Eagle GunSafe Program includes an instructor guide, activity books, posters and an animated video to explain its four-step safety message.” Other resources include Boy Scouts, 4-H and local certified instructors.

6 hrs ago
by Sarah Showfety