Does texting trump talking at your dinner table? Does your teen spend more quality time with his smartphone than you? Are you even guilty of staring at your screen when you should be looking at your child instead?

Related story These Coveted Amazon Echo Buds Have Dropped Below $100 for a Limited-Time-Only Price
Obsessed with technology? 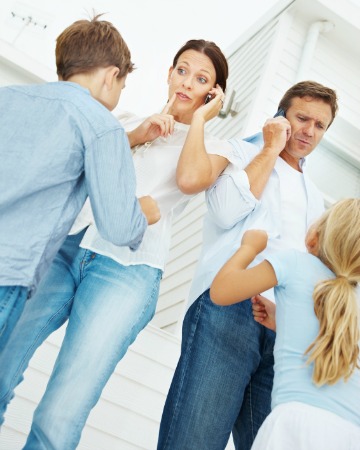 If you want more quality family time, make locking up the cell phones a family affair too.

Power down before you pass the potatoes

If your family is like most, your dinner table is covered with as many cell phones as plates. If you’re ready to put a stop to your smartphones interrupting important family time such as meals, but don’t want to feel like a nag, there are some fun options to consider. And just a tip, if you want your kids to cooperate in cell-free time, you should also power down before you pass the potatoes.

Literally lock it up 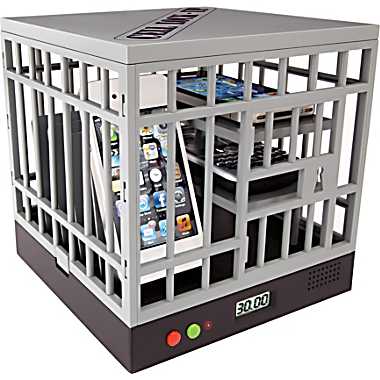 Cell Lock Up is a hilarious invention for any family ready to turn themselves into the technology police. It’s a small jail cell that holds up to six phones. It even comes equipped with a timer and hilarious audio effects such as, you’ve been sentenced to 30 minutes. Our family received one of these for Christmas and it’s so much fun to watch everyone sweat it out while their phone is in the pen. But after a while, we honestly did forget about them and were able to focus on one another and our quality family time. You can lock the phones up for anywhere between 15 minutes and one hour, until you are granted parole. But beware of the attempted break out. An alarm will sound! You really can’t go wrong with a gadget like this one that boasts the slogan: Interrupting family time is a crime!

Out smart your smartphone (and your child!)

A father designed the FamZee app for iPhones and Androids after he discovered his daughter was staying up past her bedtime texting and surfing the web on her smartphone. This app allows families to lock their smartphones during designated time frames, such as bed time, driving time and family time. (In case of emergencies, there is an emergency button.) Another added benefit of this app is it allows you to track the family’s usage and also has a GPS locator.

Design your own cell phone-free zone

If you’re often met with moans and groans from the kids when you ask them to detach themselves from their cell phones, ask them to help come up with the ideas for how you all can take a break from texting, apps and all things cell phone related.

Have a family brainstorming session for how you can creatively put the cells away during certain times of the day. One idea is to construct a miniature parking lot or parking garage with spaces to park each family member’s phone. You could also design a box or basket to hold all the phones during designated time frames. Or perhaps you can choose an entire room(s) in your home where no cell phones are allowed.

So what happens when someone in the family violates the cell phone free time? Because, let’s face it, it will happen. As a family, you can also come up with some penalties and have a little fun with them too. For example, if you pull your phone out at dinner, you have to put a dollar in the cell-phone violations jar. You can also give a cell citation to anyone who has a lack of consideration or who has disturbed the peace.

SheKnows Parenting Challenge: Turn off the tech
Top New Year’s resolutions for families
6 Ways to maximize your family’s time together