It’s the first Celebrity Baby Bump Day of 2013! The newest addition to our list includes pregnant Kim Kardashian, who just announced she is expecting a baby (or is it twins!?) with Kanye West. We spotted Channing Tatum’s wife, Jenna Dewan-Tatum, showing off her baby bump in a flowing frock, while Shakira shows off her bare bump proving she is still pregnant. Expecting Jessica Simpson and Kristen Bell round out our list of cute pregnant celebrities of the week. 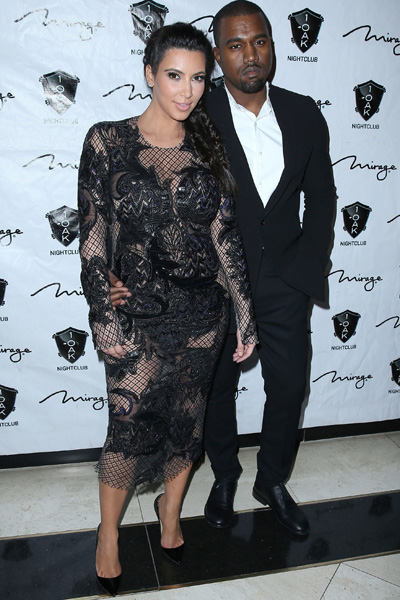 Never mind the fact that Kim Kardashian is technically still married to Kris Humphries, the 32-year-old reality star has confirmed she is pregnant with Kanye West’s baby!

Kardashian shows off her baby bump in a black lace dress as she and West pose for pictures at the New Year’s Eve countdown bash at 1 Oak Nightclub on December 31. The reality star is three months pregnant — and we can make out a hint of a baby bump.

Kardashian told reporters that she and her boyfriend of eight months do plan on finding out the sex of their baby — or is it babies? Recent reports speculate that she is possibly carrying twins however that has yet to be confirmed.

“I have felt good. I haven’t had any morning sickness, but it still isn’t the easiest,” she told Us Weekly. “People always say it’s easy and fun. It’s definitely an adjustment learning about your body and stuff like that. I’ve been feeling really good so that’s good.”

Next up: Channing Tatum’s baby mama!