Our country is mourning in the wake of the tragedy in Newtown, Connecticut. Though it will be a long time before we know many of the true details about the incident, it is being reported by many news outlets that the shooter had autism. 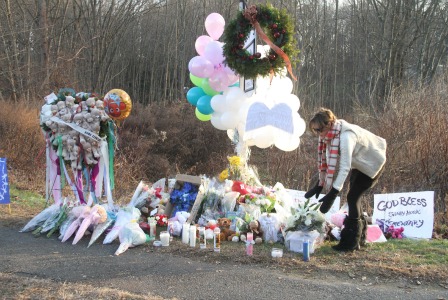 Regardless of whether or not the shooter actually had autism, it’s important for the public (and the media) to realize that autism spectrum disorders (ASDs) are not associated with criminal violence.

On Friday, December 14, 2012 at 2:00 p.m., my parents, accompanied by my husband, 5-year-old daughter and I, took our seats in our son’s filled-to-capacity elementary school auditorium. The long-planned and much-anticipated “All-First-Grade Family Day Assembly” was about to begin. As each of the three classrooms began to march and sing in unison down the respective three available aisles, tears began to flow. As each child took his/her place at the front of the auditorium, a video montage played that showed each first grade child in his/her family photo. Every photo shown had the same happy-go-lucky-not-a-care-in-the-world smiles, the only difference was the photo’s location: Beaches, boats, mountain tops, Santa’s lap, Grandma’s lap… More tears.

The children performed. Ethan, our 7-year-old with autism spectrum disorder, was beyond perfection: He sang and danced with his classmates, and for that half hour, was completely typical. Then, the teachers called him to the piano to play the school song, while the other children sang. By then, my emotional dam opened.

“What’s the matter with you today? Ethan is doing great!” my husband whispered. “He is,” I said, “I’m crying because 20 sets of parents will never be able to experience the joy of seeing their child in a Family Day Assembly.”

Twenty minutes, and a lifetime away in bucolic Newtown, Connecticut, 20 families, and the entire community, were in the midst of unimaginable grief and horror; their collective lives shattered into millions of pieces by the actions of one unstable madman. At 9:40 a.m., after he murdered his mother in their home, the madman stormed into Sandy Hook Elementary, murdered 20 beautiful, innocent children — all ages 6 and 7 — shot numerous times at point-blank range, and six adult educators who died heroes, trying to save the lives of “their” children.

Like hungry rats in search of the last cheese morsel, national and local media fell over themselves to cover the latest, and all-too-common American Tragedy. In their haste, and disservice to all, these alleged reputable organizations reported false information as fact, which was egregious. Initially, the media falsely reported the actual madman’s name and identity (they named, and showed his brother’s photo); the mother’s relationship to the school (she was neither the school’s kindergarten teacher, nor was she murdered in a classroom); the father’s status (he was reportedly murdered at his home in New Jersey; he is alive and lives in Connecticut; and that the murderer had autism.

The mere mention of autism sent the news media into a sound-bite frenzy. “Experts” in search of their proverbial 15 minutes of fame, spoke with conviction that autism can bring about such deviant and horrific behaviors; these experts chose to completely disregard that the murderer had numerous psychiatric issues as well.

The truth about autism

The combination of the Newtown tragedy and the vile, wide-spread ignorance of the so-called experts, gave me incentive to call life-long family friend Michael R. Mantell, Ph.D., clinical psychologist, former chief psychologist at Children’s Hospital and Health Center, San Diego, California, for a real expert opinion. “Autism is not a mental illness any more than epilepsy, Parkinson’s or multiple sclerosis are — though the latter are brain, or neurological, disorders. Not all brain disorders are categorized as mental illnesses. Anyone who has the privilege of competently working with youngsters and their families with autism, understands it is a genetically determined, biologically- and neurologically-based developmental disorder. They have long abandoned the outdated, empty notion that it’s psychological or psychiatric or ’the parent’s fault.’ That [the classification] is found in the DSM is meaningless.”

What the experts say

Three of the nation’s most respected autism organizations, also found the media’s depiction of autism spectrum disorders reprehensible, and released their own statements to combat the stated assumption that autism begets violence:

Autism Speaks: “Our hearts go out to the families and town of Newtown, Connecticut in the wake of this heartbreaking event. Several media outlets are reporting that the shooter might have had an autism spectrum disorder. Some have also inaccurately reported that there is a linkage between autism and planned violence. We ask that blame not be placed on people with disabilities or disorders in the midst of these types of tragedies and that everyone keep the families of Newtown in their prayers.“

Age of Autism: “The senseless shooting massacre that took the lives of dozens of innocent victims — most of them children — at Sandy Hook Elementary School of Newtown, Connecticut was a horrific and unprecedented tragedy. Age of Autism mourns the deaths of all innocent victims of this awful crime and offers its deepest condolences to their families. Additionally, we are deeply disturbed by the association of the perpetrator of this awful crime by various media outlets to a vulnerable community — the autism community — with rumors that he was on the autism spectrum. Regardless of whether or not the shooter truly is on the autism spectrum, we wish to make it clear that autism spectrum disorders (ASDs) are in no way associated with criminal violence. More often than not, people with ASDs are the victims of such violence, not the people committing them… Today, we are fighting some of the most vile stigmas that can befall people with autism and disability in general, and we ask other newspapers — both online and print — as well as other media outlets in general to take a strong and public stand against such bigotry… ”

Autistic Self Advocacy Network (ASAN): “Our hearts go out to the victims of today’s shooting massacre at Sandy Hook Elementary School in Newtown, Connecticut and their families. Recent media reports have suggested that the perpetrator of this violence… may have been diagnosed with Asperger’s Syndrome, a diagnosis on the autism spectrum, or with another psychiatric disability. In either event, it is imperative that as we mourn the victims of this horrific tragedy, that the commentators and the media avoid drawing inappropriate and unfounded links between autism or other disabilities and violence. Autistic Americans and individuals with other disabilities are no more likely to commit violent crime than non-disabled people. In fact, people with disabilities of all kinds, including autism, are vastly more likely to be the victims of violent crime than the perpetrators. Should the shooter in today’s shooting prove to in fact be diagnosed on the autism spectrum or with another disability, the millions of Americans with disabilities should be no more implicated in his actions than the non-disabled population is responsible for those of non-disabled shooters… As our great nation has so many times in the past, let us come together to both mourn those killed by acts of heinous murder and defend all parts of our country from the scourge of stigma and prejudice.”

The parents and families who lost loved ones on December 14 now exist second by second, minute by minute, hour by hour, day by day with their new reality. Yet, as parents and families with children on the autism spectrum, we must also find the strength and power to combat the vile misconceptions and ignorance that have now pervaded our world; we must defend our children, many of whom are unable to defend themselves. In that way, we can honor those 26 lost lives as we seek a safer environment and healthier world for all.

For the past decade, my dream was to live in a world where every day was Monday, September 10, 2001, and evil hadn’t yet reared its ugly head to such a mass degree. Today, it seems, my dream for all parents is to live in a world of Thursday, December 13, 2012s. In the meantime, parents all over America will hopefully seek to educate themselves about what autism is and what it isn’t; what mental illness is, and what it isn’t; and simply say a prayer that 26 people rest in eternal peace. Amen.

Autism in a weary world
Autism: Let there be light
Autism: That’s what friends are for