Jennifer Hartzog, 31, of Mebane, North Carolina, knew she might never have kids when her kidney transplant failed three months after her wedding day. Instead of enjoying worry-free newlywed bliss, Jennifer had to go back on dialysis. She never could have imagined what happened next.

by Jennifer Hartzog
as told to Julie Weingarden Dubin

When I was 12, I lost my kidney function due to hydronephrosis (kidney swelling caused by a backup of urine). Both of my natural kidneys were removed. I was on peritoneal dialysis until I got a living donor transplant from my mother three days before my 13th birthday. Two years later, the kidney failed. I was put back on peritoneal dialysis until I got a non-living donor transplant when I was 17. 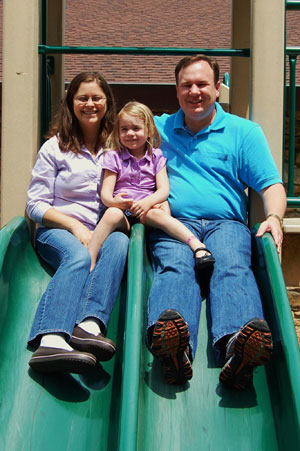 In January 2004, I met and fell in love with Kevin, my future husband. I was 22 and I had my third kidney transplant on February 12, 2004. We spent our first Valentine’s Day in the hospital while I was recovering.

We got married in September 2006 and talked a lot about having kids. As a teenager, my doctors told me that I’d probably have difficulty having children and that it wasn’t a good idea. When I told Kevin that, he didn’t believe me, and he started doing his own research and found that it was possible for me to have children; it would just be a high-risk pregnancy.

Three months after our wedding day, my transplant failed. I was devastated. I started on traditional in-center hemodialysis until my transplant doctor suggested a new treatment option — home-hemodialysis. I soon started using the NxStage System One hemodialysis for the home.

While I was frustrated and angry that yet another transplant had failed, I was excited that I had the option to take over my own care and be on my own schedule for dialysis treatments. It also meant I could continue to work, which was a relief. I knew I’d be OK since I had done practically every other treatment option out there and now I could have treatments in the convenience of my home.

But something wasn’t right. I started throwing up during and right after my treatments. At first my nurses and I thought it might just be my body adjusting to the different treatment schedule. But when it didn’t get better, they started asking if I could be pregnant. I was sure I wasn’t. The nurse at my OB-GYN’s office did an ultrasound. She put the picture up on the screen and the first thing that showed up was my 10-week-old little baby. I couldn’t say anything for a whole minute! I had to show the ultrasound pictures to Kevin before he would believe me. I found out at some point that women on dialysis have about a 2 percent chance of getting pregnant.

Doctors typically do not recommend having a baby while on dialysis due to the high risks involved for most patients. Every doctor I came into contact with for a month after finding out I was pregnant asked me if I was sure I wanted to continue the pregnancy. I had to tell them that this child had made it to 10 weeks without me doing anything special so of course I was going to keep her, and I wasn’t going to change my mind.

My pregnancy was almost completely normal but the doctors kept a close watch on me. I had check-ups bimonthly and then weekly in my last trimester. I increased my NxStage dialysis treatments from six days of 2.5-hour treatments to seven days of 4-hour treatments.

My daughter, Kaylynn, is a miracle. There were so many things that could have gone wrong and didn’t. If I have a bad day, all she has to do is grin at me and my mood changes. I love everything about being a mom, even when I hear “Mommy!” 5,000 times in 15 minutes!

Stop and play with your children. They make everything else seem less important.