When Twitter was just catching on, Amy Lupold Bair had an idea to welcome new sites to the web with a SiteWarming party. That idea snowballed into her successful business as a marketer and Twitter party maven. 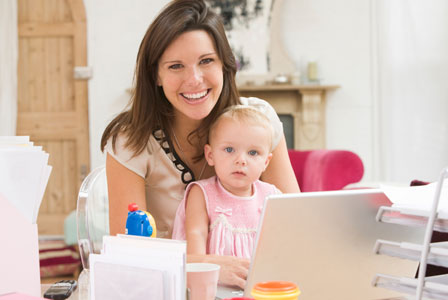 When Twitter was just catching on, mom of two Amy Lupold Bair had an idea to welcome new sites to the web with a SiteWarming party. That idea snowballed into her successful business as a marketer and Twitter party maven.

Resourceful Mommy Amy Lupold Bair spun a little idea into a successful business. How did she do it?

SheKnows: Where did the idea of SiteWarming parties come from?

Amy Lupold Bair: This is somewhat of a long story, but the short version is that I wanted to hold an event to launch my own blog, ResourcefulMommy.com, and there were no marketing or launch events being held on Twitter. Events taking place on other platforms such as forums were being announced on Twitter, and it simply made more sense to me to keep the event where the people were already located. The first night that I held a SiteWarming, three people approached me asking to hire me to hold an event for them. SiteWarmings by Resourceful Mommy was born!

SK: Did you expect that these online parties — something that didn’t exist before you created them — would take off the way they did?

ALB: We have not had a single week without a party since the launch mid-2008, but at the time I told people that I would be surprised if they lasted six months. Twitter hadn’t even monetized their own platform yet, and I was certain that my account would be kicked off of the site.

SK: At what point did it become clear that these parties were the start of something much bigger for you?

ALB: It was almost immediately clear that this was the start of a rapidly growing business and not just an occasional activity. In fact, by February of 2009 — just seven months after I began blogging — I had already hired my first staffer and launched the Global Influence blog network.

SK: What do you wish you knew before you started hosting SiteWarming parties?

ALB: I wish I had known that four years later, it would still be a business seeing constant growth and continued success. I have worked each day with the anticipation that it could all end tomorrow, and had I known that was not the case, I might have taken a few more vacation days or made time to catch my breath.

SK: You’ve grown your brand and created such a successful company — what have been the keys to your success?

ALB: Someone once told me that people working in social media appear to be running around like they are on fire, trying to keep up with what the next guy is doing or the next big thing. Rather than worry about everyone around me, I’ve continued to get better at what I do and work consistently and diligently for my clients. That has not only helped my business, but also my sanity.

SK: You come from a teaching background. How has that helped you (or has it?) in creating and growing your business?

ALB: Once you survive teaching Drama to middle schools, everything else is a walk in the park 😉

On life… and what’s next

SK: How do you balance life with the demands of a busy online-focused career?

ALB: I am still figuring that one out.

SK: What’s next for you?

ALB: Right now I am writing a book with Wiley publishers, Raising Digital Families For Dummies, that will be out in April of 2013. There are a few more exciting developments coming next year, but that is the one that I am most proud of personally. It has long been a dream to write a book, and the entire process has been nothing short of fascinating.