Erika is a do-it-all mother — she is currently working toward her Ph.D. while expecting a baby, parenting her 9-year-old son and planning a wedding. 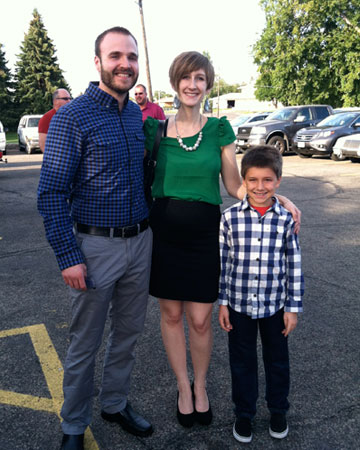 Her academic accomplishments are impressive, especially considering she was a young, single mom when her son was born. Her ability to balance her professional life with pregnancy, raising a child and building a relationship is inspiring.

As a young mom, Erika Fuchs has gone through school while parenting her son, and she’s now expecting her second child while working toward a doctorate — oh, and she’s also planning a wedding! Her experiences as a young, single mom have helped shape her life and her goals as she works hard to balance work, studying and parenting, while nurturing her relationship and planning for the future.

SheKnows: Erika, tell us a bit about your background. Where were you born, and where did you grow up?

Erika Fuchs: I was born in North Dakota and grew up in a small town in western Minnesota. I still live in Minnesota, but small town life was really never for me.

SK: Did you enjoy going to school when you were young?

EF: Absolutely! I learned how to read at a very young age and was highly encouraged, though never pushed, by my family to excel in school. Often a “teacher’s pet” kind of student as a child, I also was in the gifted/talented program and several other academic groups (like Mathletes, Knowledge Bowl and so on). I was also involved in other activities like band and sports, and I was in several plays as a kid.

SK: What did you want to be when you grew up?

EF: As a very young child, I dreamed of becoming a family physician or an OB-GYN. Of course, childhood dreams can shift as you grow older and know yourself better, and I eventually went in another direction, though it’s not too far from those dreams.

SK: How old were you when you found out you were expecting a baby?

EF: When I found out I was pregnant with my first, I was 19 years old and about to start my sophomore year of college. I am now 29 and pregnant with my second, in my third year of a Ph.D. program.

SK: What sort of plans did you have for yourself before he was born that you wound up changing, if at all?

EF: As I mentioned, I dreamed of becoming a physician, but knew that it would be very difficult, though not impossible, to properly care for a child as a single mother through medical school without a local support system. Who would watch the baby (and eventual child) when I had to work nights or weekends? My plans started to shift, but it wasn’t just because I didn’t have reliable evening and weekend daycare. My ideas about health and the type of contributions I could and wanted to make to health and science were also changing.

SK: When did you start college?

EF: Like many young people, I jumped at the chance to start college as soon as I graduated high school in 2001. I chose a school across the state from most of my family, though still close enough to drive to my hometown once in awhile.

SK: What were your goals in the beginning?

EF: I went in knowing that I wanted to complete a B.S. in biology, which would help me acquire the coursework necessary for applying to medical school. If I did things over again, I might choose another major or take classes in some other areas, but overall I think things worked out well and gave me the foundation to explore the topics I would eventually study further.

SK: Where did Tavin go while you were in class?

EF: Tavin, who is now 9-1/2 years old, was born during the spring semester of my sophomore year of college. I returned to school that fall after taking that spring semester off (I was due in the middle of the semester), and he came with me to two of my classes, approximately one to two hours each day. I was also taking two online classes, which helped give me some flexibility.

At the time, having a baby carrier saved me. He slept most of the time, but I would bring some toys that he could play with as he started to become more mobile by the end of that fall semester. Obviously, the professors from those two classes were supportive of the idea prior to me coming to their first classes. I also had a good friend who would watch him for me from time to time. The following fall, he started daycare at about 16 months of age, and continued there until he was old enough for kindergarten.