We turned the tables on Entertainment Tonight host Nancy O’Dell — and interviewed her! The busy mom opened up to us about being a mom to Ashby, as well as her cool new educational app, Little Ashby: Star Reporter! 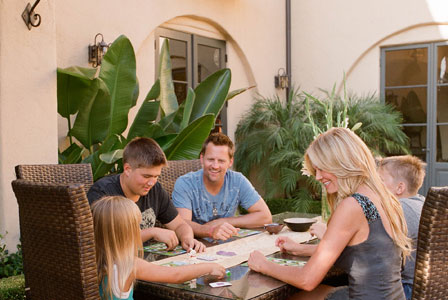 Find out her inspiration behind her new venture and her surprising answer when asked how she would feel if her daughter wanted to be an actress.

Entertainment Tonight host Nancy O’Dell is known for getting celebrity moms like Hilary Duff and Angelina Jolie to open up, but this time it was her turn to talk about her life with her daughter, 5-year-old Ashby. O’Dell has created a new educational app called Little Ashby: Star Reporter (iTunes, $2.99) which features a kid reporter who goes on fun assignments, with her first assignment being to cover “Santa’s Big Premiere” on Christmas Eve.

“I love that she is interviewing the biggest ‘get’ a kid reporter could possibly secure too — Santa, of course!” O’Dell tells SheKnows of her new children’s app. “And just like real Hollywood celebrities do, Santa has a publicist — an elf!”

O’Dell said it was important to her that her app was fun, but educational. “One of the things I wanted to make sure [was] the app also taught kids good morals and values, so the story has that element as well,” she said.

SheKnows: Tell me about Little Ashby: Star Reporter! What gave you the idea to develop your own app? 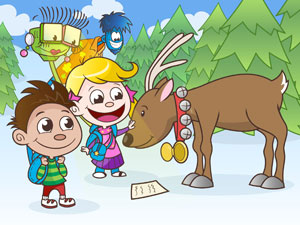 Nancy O’Dell: I have long wanted to do a series of stories about a little reporter who goes on these fantastic assignments with a “FUNtastic” crew. I always say I decided on my career as a reporter because it is ever-changing (the people, the subject, the places), and therefore, I am always learning something on every interview. Kids can’t just travel around the globe in reality, but they can via an app! And I saw my daughter having such a great time using various educational apps, so it was obvious to me I should begin the series via an app.

Little Ashby: Star Reporter allows little ones to be able to go on adventures exploring all the places in the world while learning so much in the process. And it’s working! Little Ashby’s first assignment is to cover Santa’s Big Premiere on Christmas Eve. The app is incredibly interactive and it has real videos throughout for kids to tap on and see, one being the Northern Lights which Little Ashby and her crew see at the North Pole. There are also games at the end to reinforce what they learn.

SheKnows: Did your daughter help you come up with the characters?

Nancy O’Dell: Oh yes, she was my “tester-outer!” Every time I would get new drawings in of the characters, I would show them to her and she gave me great ideas on how to tweak them. She has a favorite character — it’s Boomer, the boom microphone, who is really cool and laid back. I actually got my own audio guy at Entertainment Tonight, who has this really fun voice, to be the voice of Boomer! The other day my daughter wanted to call up Boomer, so “Boomer” and I called her from the sound booth at E.T. and it made her day!

SheKnows: You once said that Ashby is “boy crazy.” Is she still a big flirt? Can you see her following in your footsteps as a reporter?

Nancy O’Dell: Oh yes, my little girl is still a big flirt. She has two older brothers, my stepsons who are 13 and 17, and she falls in love with all of their friends who come over. It is soooo funny to witness! As far as her being a reporter, she certainly has the curiosity to be one. I love seeing how much she loves learning! She asks such incredible questions to be only 5. It is so much fun to see how she is figuring out life. But, of course, I want her to pursue the career of her choice.

SheKnows: If your daughter told you she wanted to be an actress, what would you tell her? 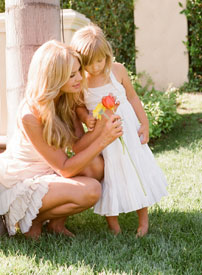 Nancy O’Dell: Good question. I, for certain, wouldn’t want her to be a child actress. I have had to report too many stories about it being such a difficult thing. As far as her choosing that as a path later on, I would probably describe to her the positives and the negatives that I have witnessed and then support her whatever she decides. That is most important!

SheKnows: I know your own mom passed away from ALS [Amyotrophic lateral sclerosis or Lou Gehrig’s disease] when Ashby was a baby. How have you kept her memory alive?

Nancy O’Dell: I am a huge album maker, so that is always the best way for me to keep memories alive. I learned to do that from my mother. After she passed, my father sent me about 50 scrapbooks she had made of my life from birth up to the months before she passed away. I felt so connected to her looking at all of our pictures together and reliving the memories. I often go through those scrapbooks with Ashby, describing what a wonderful “Grandma Betty” she had and I tell Ashby that she has a special angel in heaven watching over her.

SheKnows: I love your daughter’s name! What is the story behind it?

Nancy O’Dell: Ashby was named after my grandfather, who was such a great, honorable man. We had thought of it as a possible name for a boy. But my husband loved it so much, that even when we found out we were having a girl, he still wanted to name her that. I looked it up and found out it was dual gender indeed — perfect!

SheKnows: What are some of your favorite apps?

Nancy O’Dell: I, personally, am slightly addicted to Words with Friends. Gosh, I get so competitive on that! There’s another app that my daughter and I love using together right now, which shows the lyrics to Christmas songs and we just sing along belting out the tunes! We have music in this Little Ashby app, and based on how big a hit I see music is with my 5-year-old, we’ll be adding even more music to the next Little Ashby adventure!

SheKnows: I love that your app has Ashby interviewing Santa Claus. What are some of your family’s favorite holiday traditions?

Nancy O’Dell: Ashby’s assignment in covering Santa’s Premiere is to come back with the story of what the Holiday Spirit is all about. That is also one of the things we try to do with our traditions. We have a board that counts down to Christmas starting after Thanksgiving. Every day, we all tack on the board a piece of paper saying what their favorite “gift” of the day was. But it can’t be a physical gift, of course, but rather a kind gesture they witnessed, did themselves, or received from someone. That way it teaches them what the real gifts in life are!

8 hrs ago
by Jennifer Audrie