What were on the minds and Twitter feeds of some of our favorite celebrity moms? Kelly Ripa tweeted about her sons Michael and Joaquin’s matching mohawks, while Kourtney Kardashian tweets style tips from the museum with Mason. Bethenny Frankel writes about post-nap meltdowns, while Tori Spelling shows off Stella’s “toddler chic” style. 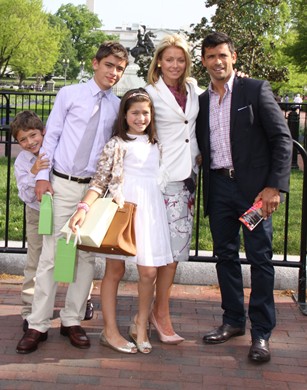 Kelly Ripa took to Twitter to show off a photo of her two boys, 15-year-old Michael and 9-year-old Joaquin.

“Bro hawks!” she tweeted, with a link to a photo of the two brothers showing off their matching mohawks.

“Latina magazine named ur hubby one of the sexiest men alive. Keep him on a leash,” tweeted one follower to Ripa, referring to her husband of 18 years Mark Consuelos.

“So sexy!” Ripa wrote back.

It sounds like she not only lucked out with a fab husband, but great in-laws as well!

“You have the most gorgeous in-laws! And your mom-in-law needs her own cooking show – she’s adorable!” tweeted one follower.

What is on the agenda for Bethenny Frankel? “30 mins of yoga: check. Ballet w Bryn: check. Now I’ve got to dig into writing my next book: the Skinnygirl rules,” tweeted Frankel.

Her life isn’t all glamorous, however, as the new talk show host tweeted, “How come I didn’t realize that I needed a waterproof mattress cover for when Bryn wets through her diaper?” she tweeted, followed by, “Bryn just had a post-nap meltdown worthy of an exorcism.”

“Being a work at home & stay at home mom means never working out bc my peanut constantly wants to be together which I can’t resist,” she later wrote.

It also sounds like her daughter kept the airplane entertained! “Bryn sang the whole abc song on the plane and the entire cabin clapped and cheered afterwards. Like a movie! Made me smile!” wrote Frankel.

“The definition of toddler chic,” tweeted Tori Spelling, with a link to her website that showed her daughter with a tres chic outfit.

“Last week Stella was given the task of putting together a black and white outfit (Pilgrim style) for school,” Spelling wrote on her website.

“Knowing that Stella is a ‘Go Pink or Go Home’ type of girl I thought this might be a challenge. But, when Stella emerged from her room wearing this chic, polished and on-trend black and white ensemble, I must say I was blown away. I constantly wonder how a 4-year-old can possibly have such a fabulous fashion sense. I’m obsessed with the way Stella mixed her prints here — pairing her white polkadot tights with a black and white colorblocked dress and a super chic coat. The knee-high black boots and the retro inspired feather headband complete the look, and make Stella the definition of ’toddler chic.’” 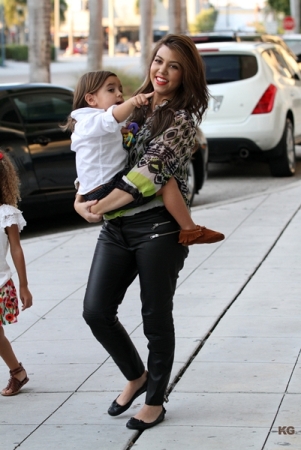 “Squeezing in a morning workout! So what if its 15 minutes?! Better than nothing, right?” tweeted Kourtney Kardashian, who looks great after the birth of her second child, Penelope, in August.

“Baby alligators, otters and geckos, oh my!” Kardashian later tweeted, with a link to photos of her and Mason going to the Miami Museum of Science and Planetarium.

“I highly recommend it. It was very modern and was very different than other museums I have been to,” she wrote. “They had a baby alligator that we got to see up close and touch, little baby otters that were swimming, turtles, lots of space items, geckos and lots more. My favorite part was the astronaut ice cream that I stocked up on.”

“When I get inspired I wanna go home and shave my head and dye it blue. Willow may cry though- so… Maybe a light fuschia,” she later wrote, referring to her 1-year-old daughter Willow.

16 hrs ago
by Claire Gillespie