During the holiday season, those of the Jewish faith celebrate Hanukkah, the Festival of Lights. 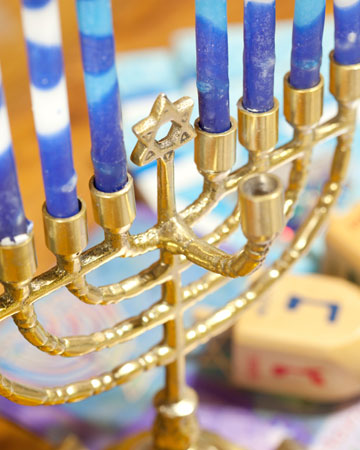 Discover why Hanukkah is celebrated over eight days and how each day is marked with candlelight and blessings.

If your only exposure to Hanukkah — also spelled Chanukah — is comedian Adam Sandler’s famous holiday song, read on. Hanukkah is one of many Jewish holidays. Hanukkah falls in December and has become a highly anticipated Jewish holiday, particularly for children. Learn more about Hanukkah in our holiday guide.

The history of Hanukkah

Also called the Festival of Lights, Hanukkah commemorates the rededication of a Jewish temple that had been taken over by the Greeks. During a time of war in second century B.C., the Jews led the Maccabean Revolt and reclaimed the temple. The beginning of Hanukkah marks the day the Jewish army removed the Greek statues and relics from the temple. According to the stories of this time, a miracle occurred when the Jewish forces lit a small amount of oil for the temple’s menorah. Instead of burning briefly, the oil burned for eight nights. This is why Hanukkah is celebrated for eight nights.

Try these Hanukkah crafts for kids >>

Unlike other Jewish holidays that involve restrictions and special holiday services, Hanukkah’s sole observance is the lighting of the menorah. The other traditions associated with Hanukkah, such as games and songs, are not strict religious observances. A menorah is a candelabra with nine branches or nine receptacles for candles or oil. Each night, a smaller candle is used to light the other eight candles, from right to left. As the family lights each candle together, blessings are recited. Candles are left burning for a short period of time in the evening.

There’s no religious significance to gift giving during Hanukkah, but it has become a major tradition with the holiday. It’s understood that the relative closeness to Christmas and the commercialization of the Christmas season have encouraged Hanukkah celebrations to involve presents. It’s common for parents to give their children small gifts on each day of Hanukkah. Individual families may celebrate differently according to family tradition. Some families observe the tradition of giving money to children after the menorah is lit, while encouraging the children to donate a portion of that money to charity.

Find inspiration with these 8 unique Hanukkah gifts for kids >>

Fried foods are cooked and eaten during Hanukkah as a symbol of the miracle of burning oil in the rededicated temple. Potato pancakes (latkes) and doughnuts filled with jam (sufganiyot) are both a popular staple in many Jewish households. The fried jelly doughnut is a traditional Hanukkah food, but may also be stuffed with fillings like vanilla cream or chocolate, instead of the usual fruit flavored jams and jellies. More widely known, latkes are also a traditional Hanukkah food. Latkes are fried potato pancakes that may be served with sweet or savory toppings.

Other Hanukkah customs mentioned above include playing with four-sided spinning tops called dreidels and exchanging gifts. In some families, children are given chocolate candy coins instead of money. In recent decades, particularly in North America, Hanukkah has exploded into a major commercial phenomenon, largely because it falls near or overlaps with Christmas. While Hanukkah is a time for celebration, in terms of the Jewish religion, it isn’t the biggest religious holiday of the year. It is actually a relatively minor holiday, with no restrictions on working, attending school or participating in other activities.

Looking for some new activities this year? Here are a few ideas.