You get it, really, you do. You felt the same way about your mom. (Eye rolls and deep sighs come to mind.) So why does your tween’s sudden change of attitude hurt so much?

Related story Dear Moms: Even When You Feel Invisible, We See You 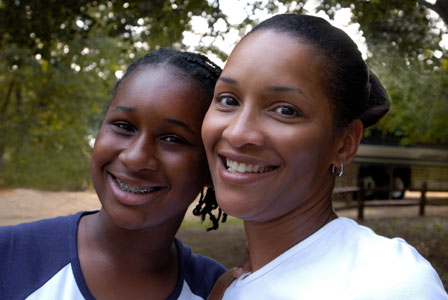 She no longer wants to be seen with you at the mall. She wants you to keep your distance at school functions. It’s so uncool to hang out at home with you when she could be with her friends. You know in your heart that this is part of growing up, but that still doesn’t make your tween’s behavior any easier to handle.

It may not have a zippy title like the “terrible twos,” but, according to Dr. Fran Walfish, the psychological goal of adolescence parallels that of toddlerhood. “The toddler must claim herself as a separate being from Mommy. She does this by saying no, resisting demands, and having normal temper tantrums. The teen (tween kickstarts the phase) must resolve the separation by once again being moody, disagreeable and even defiant in order to emerge out of adolescence and into adulthood with her own ideas and opinions about religion, relationships, love, politics, morals, ethics and character.”

It’s abundantly clear that your tween is doing everything she can to distance herself from you emotionally and physically (asking you to drop her off blocks from where she’s meeting her friends is pretty direct), but is this struggle for separation causing major problems for her or for you? Is she fighting you on going to an important family event or does she not want to join you on your errands? Has she stopped wanting to listen to your advice about clothes and friends or is she blatantly ignoring your rules?

Laurie A. Gray, JD, warns, “I advise moms to keep the lines of communication open and choose their battles wisely. Avoid being critical of her choices in clothes, music, friends, etc. and focus on being accepting of her as a person. Kids have to test our boundaries and our love. It’s part of growing up. As long as your boundaries are healthy and your love is unconditional, you’ll both make it through this phase.”

Find common ground and fight for your time with them

Ever feel like your tween suddenly doesn’t think you “get her?” Not only are you uncool, but you have no idea what’s important in her life. Sara, mother of one from Glen Falls, New York found a way to bridge the gap with her tween daughter. “My tween either had headphones on and locked her door and certainly did not want to be with me as she preferred her friend time. When friends were around, I did not exist,” says Sara.

“Here’s what worked for me. Nighttime is a magical time. I made her include me in her Instagram and praised her for her creativity in the use of it; we would talk about what she posted and I started a game called 20 questions. She loves it. I then set up shopping dates with her. These have become very special mommy times. I think it’s normal when tweens start to separate; you just have to fight for your time with them.”

More ways to connect with your tween

Popular virtual worlds for tweens and teens
Give your middle-schooler more freedom
Elementary school to middle school: What moms need to know