Do you ever wonder why your child doesn’t want to shower? 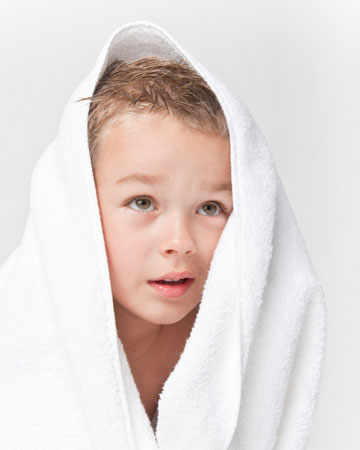 It’s time to stop pulling out your hair over his dirty mop and get him to hit those showers — willingly.

It’s the end of a long day and you’ve asked your child to shower umpteen times but he isn’t interested at all. You’re scratching your own (clean) head wondering, how can he not smell what I smell? And why doesn’t he want to wash the dirt off? He’ll feel so much better. Won’t he?

Why doesn’t he want to shower or take a bath?

Maybe the answer is as simple as asking him. Have you ever posed this question to your child: Why don’t you want to take a shower or a bath? Maybe his answer will be as simple as wanting to switch from one to the other. He may feel he’s outgrown the idea of a bath or conversely, maybe he’s not taking to the idea of a shower as some children don’t like the sensation of water pouring over them. Or perhaps he’d rather shower in the morning versus at night. Find out what’s holding your child back from wanting to get clean, then make an agreement with him that he will want to stick to.

Parenting specialist Bonnie Harris says, “If you have a water-resistant child, sit with the child and discuss the problem you, the parent, are having. After all, this isn’t a problem for the child, right?”

“Owning the problem means, I am concerned that you’re not getting your body clean. I know you don’t care and it’s my issue. But as your mother, it is my job to make sure you have good hygiene. So I need your help with my problem. When and how often can I expect you to get clean? I’d like to make some agreements on this, please. Then the negotiation starts until both parent and child can agree on a decision. The process should not stop until both can agree. Then write it down and both sign.”

What’s your child’s shower like now? Is it boring? A plain white bar of soap? A two-in-one shampoo with a nondescript label? Try upgrading his shower experience to help him start looking forward to it instead of dreading it.

Take your child to the store and let him pick out new soap, shampoo, conditioner and body wash. Consider the idea of a shower radio. Give him one of those back scrubbers. Maybe he’d like a set of crayons to draw on the wall. You can even grab the crayons and leave him a message that he’ll be surprised with next time he steps in. Let him help pick out new towels or a robe to put on after he’s done. Hopefully he’ll think less about the chore of getting clean and more about how fun the shower can be.

The best bath-time tips and gear for kids >>

You can’t do”X” until you shower

Getting your child into the shower each night doesn’t have to be exhausting. Tell him that there will be consequences if he doesn’t. Parenting coach and author Brandi Davis suggests, “Be clear about the consequence. If they do not get into the shower they cannot move onto the next activity. TV, movie, books before bed. If they run out of time for things that they think are fun, they will rethink their defiance. They will hop in to get to what they want.”