In the last decade, interfaith couples have grown substantially in number, which means more families are celebrating the accompanying holidays. For example, many Jewish-Christian families now celebrate both Christmas and Hanukkah. 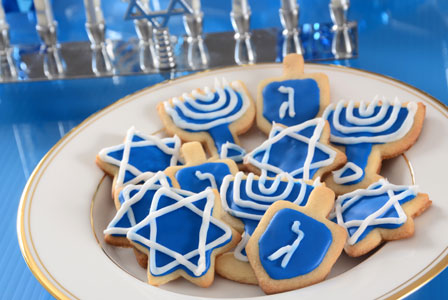 An interfaith couple may feel pressure to choose which traditions will be passed down a generation and finding the right balance is key to ensuring a happier holiday season.

Low and behold, December is upon us and that means eggnog lattes, ice skating and retail sales galore. It’s also the big month for holidays: Christmas, Hanukkah and Kwanzaa, just to name a few. These rituals say a lot about our country — we’re a diverse lot, that’s for sure. But our traditions are starting to merge together and that’s reflected in the way we celebrate holidays. Though interfaith families were rare historically, they are now interwoven into the fabric of our culture. There is no cookie cutter for the American family, so for all intents and purposes we’ll focus on the Jewish-Christian example.

When interfaith couples marry, and subsequently decide to raise a family, there are multiple issues that need to be addressed. Naomi Schaefer Riley is the author of ’Til Faith Do Us Part: How Interfaith Marriage Is Transforming America. In an opinion piece in the The New York Times, she says that in the first decade of this century, 45 percent of marriages were interfaith — including Catholic-Protestant unions, marriages of mainline Protestants to evangelical Christians, and unions of those who affiliated with a religion and those who didn’t.

Schaefer Riley says that while the rise of interfaith unions may be seens as a sign of societal progress, they are more likely than same-faith marriages unions to be unhappy, possibly ending in divorce. She goes on to say that interfaith marriages may actually lessen the strength of religious communities over time, as the devout followers of a religion feel the pull of their spouse to celebrate different traditions than they were raised to follow. For couples who feel the committment to following both religions in the home, there needs to be communication from the very beginning — and the dedication to make it work.

Interfaith couples can face a difficult situation if one partner feels stronger about his or her religion and passionate about passing down holiday rituals to the children. If you haven’t heard of the “December Dilemma,” well this is it: Christmas or Hanukkah? Experts advise couples to remain open to new ideas and communicate. The tension can grow if the eight days of Hanukkah overlap with Christmas, so be open to compromising.

Many interfaith families have solved the dilemma by celebrating both holidays or even having one celebration colloquially referred to as Chrismukkah. While the idea of this may not appeal to everyone in this situation, for some families this is the perfect solution.

California mom Kimberly said her Jewish-Catholic family hosts one party for both holidays.

“We do celebrate both Jewish and Christian holidays, but really from a tradition standpoint,” she said. “We celebrate Christmas with a tree and Santa… and we celebrate Hannukah as a cultural tradition. We have a big Chrismukkah party every year, which is a fun way to get everyone together and eat good holiday foods, latkes and peppermint brownies.”

Read more about kids and the holidays