Secondhand media exposure — such as a TV playing in the background — can be detrimental to your child’s homework as well as his creative thinking and development. 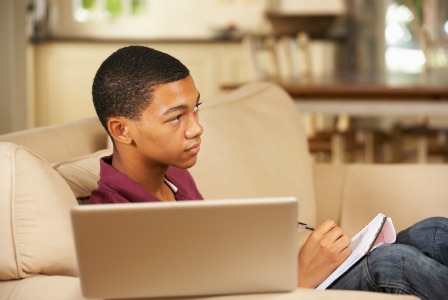 Our children live steeped in a pop culture that revels in entertainment. More and more they spend their leisure time amused and amazed by media creations. In fact, the sheer number of hours of their media connection seems to be growing exponentially. While the creators of the media world may be cheering over this, their parents have reasons to be frowning.

The problem is that kids have other things to do, tasks vital to their development: Homework, communing with family and friends, and playing imaginatively, an activity vital to their becoming individuals in a society that always needs original ideas. How do the media impact on these developmental tasks? Often, not positively.

A recent article from CNN.com describes an October 1, 2012 study published in the scholarly journal PEDATRICS that approaches this question in a surprising way. The journal article sets out to measure not the hours of time spent in front of the tube or tied to a video system or enraptured by YouTube that has become the daily fare of our kids. Rather it focuses on so-called secondhand media exposure and its impact on our kids. What is secondhand media exposure and how can this be a problem different than media over-absorption?

The article’s approach to these questions is a modest one. Its authors connected with almost 1,500 American families with children between the ages of 8 months and 8 years and took diary-like accounts of the goings-on in these homes on a given day. The question to be answered is not how much time the child lives absorbed directly in media connections but rather how long in a given day do the media serve as a background in the child’s life. The researchers discovered that these kids spent nearly four out of 16 waking hours sitting near a media gadget while engrossed in some other activity like playing or doing homework. The time is even greater when children have TVs in their bedrooms.

Is this a problem?

As the PEDATRICS article makes clear, such secondhand media exposure is known to have negative effects on children’s contact with their parents and family, on their imaginative play, and, especially by the middle grades, on homework. In numerous studies, children of various ages have been placed in rooms with TVs murmuring in the background as they set out to do homework or paper and pencil assignments. Not surprisingly, many kids do worse with the media humming and flickering nearby.

What’s the reason for this phenomenon?

Their attention spans are drifting, and they are not encoding in their memory what they’re assigned to learn. Since many kids now have TVs in their bedrooms and most kids do their homework in this very room, the two naturally collide in real life. I have not, of course, detailed the problems that such secondhand media exposure generates in children’s family life or their imaginative play. But the key seems their or their parents’ being defocused from each other due to the media gadget’s pull on them or the kids drifting away from any focus on their inner, imaginative lives, and their weaving in and out of one task into the other and doing not so good a job on either.

What is to be done?

The obvious recommendation is to remove TVs from bedrooms and turn media gadgets off during mealtimes, and to honor a child’s desire to play quietly by him or herself. The child will be encouraged to dig more deeply into one’s inner lives — a process at the heart of becoming an authentic human being.

Dr. George Drinka is a child and adolescent psychiatrist and the author of The Birth of Neurosis: Myth, Malady and the Victorians (Simon & Schuster). His new book, When the Media Is the Parent, is a culmination of his work with children, his scholarly study of works on the media and American cultural history, and his dedication to writing stories that reveal the humanity in us all.

More about kids and the media

Real Moms Debate: How much TV is reasonable for kids?
Can you keep the media from being a bad influence on your child?
How do the media usurp the parenting role?