Jackie Ourman of Irvington, New York, is raising three boys — two with life-threatening food allergies — all while studying the culinary arts and managing her own celiac disease. Read why she won’t let her kids give up on eating delicious foods, despite their dietary restrictions.

When my first child, Jake, was born in 2004, he was dubbed a “micropreemie” because he weighed only 1-1/2 pounds. The fact that he lived was a miracle. The doctors told us we had to get through the first two years — a cold could be deadly due to his weak immune system. I left my human resources job at an investment bank in New York City to care for Jake.

My little guy grew and got stronger, but four days before his second birthday, we had friends over for a Super Bowl party and Jake had a severe allergic food reaction. His face was swollen and red beyond recognition, he had hives all over his body, and he was wheezing. We learned that Jake was severely allergic to peanuts, several tree nuts and sesame.

In 2006, we had another son, Jeremy, and at about 1 year, he showed signs of asthma. Testing found that Jeremy had the same life-threatening food allergies as Jake did, in addition to egg and many environmental allergies. In 2010, we had our third son, Jarrett, and thankfully, he does not have any food allergies or intolerances. 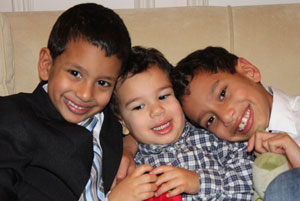 Today, my boys are ages 3, 6 and 8. In addition to food allergies, Jeremy and I were recently diagnosed with celiac disease. We need to avoid gluten (wheat, barley, rye and most oats). I felt sad for Jeremy — no pizza, sandwiches, pasta or birthday cake for him. But I think it’s been easier for him since I was also diagnosed. We are in it together, and I can empathize with him in a way that I think makes him feel he’s not alone.

I’ve always loved to cook and read about food, but my relationship with food became challenged when my love for food turned to fear. I couldn’t get past the idea that food could kill my kids.

Fear and isolation became a big part of my life because almost all of the social events in our society revolve around food. But I realized that I can’t isolate my kids or protect them 24/7. I could only do my best to try to figure out how to manage their food allergies. I became a member of Food Allergy Research & Education (FARE), which advocates for research funds and educates people on life-threatening food allergies.

I initially felt like I was throwing a pity party — focusing on all the foods that Jeremy and I couldn’t eat — but then I decided I was going to turn the situation around. I went on a quest to learn as much as I could about food and recipes for my family and also to raise awareness about food allergies and celiac disease in order to help others. I challenged myself to get more creative in the kitchen.

I’d focus on the delicious foods we could eat, and I’d tweak recipes to introduce even more favorites to our menu. My palate’s been influenced by various cultures. My parents are from Egypt. My mother-in-law is from the Dominican Republic, and I spent three summers living in Mexico. I love creating savory recipes. I want my kids to love food despite their dietary restrictions.

With my husband Jason’s support, I enrolled in the Institute of Culinary Education (ICE) in New York City. I completed culinary management school last August, and now I’m in the culinary arts program. I want to help restaurants become more allergy friendly, and I also want to work with families with similar issues so they can transition to flavorful diets.

I feel so excited and passionate about the ability to potentially guide others. I started a blog, Celiac & Allergy Friendly Epicurean (CAFE), in order to journal my experience and share recipes and resources dealing with food allergies and celiac disease.

Hey, moms: Do you know a mother with a great story? We’re looking for Mom Stories. Email Jrosewriter@gmail.com with your suggestions.

I live and breathe for my children, and I want nothing more than for them to be healthy and happy and to live lives that are as carefree as possible. I don’t want food allergies or celiac disease to define them.

Food allergies aren’t easy to live with. They provoke a tremendous amount of anxiety and angst for us, but we are thankful for what we have. I feel like I may be helping others in similar situations, and that’s inspiring.

Get out there and educate yourself on whatever issue you are dealing with and grab all the resources you can so that you can feel more in control of the situation. If there is a health issue, talk to your children in a way that helps them understand it and advocate for themselves. Surround yourself with a good support system of friends and family or join a local support group to connect with parents in similar situations.

Exclusive: Shawn Johnson Reveals the One Parenting Habit She Hopes to Kick This Year