You have to admit, your child’s feet were very close to touching the ground last time you pushed him in the stroller… but does that mean it’s time to make him walk? 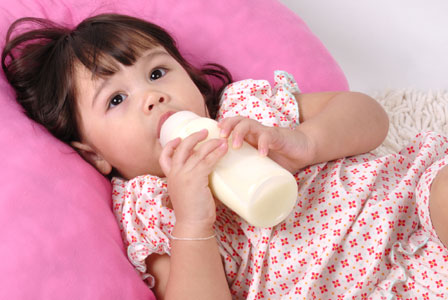 How do you know when you should bump the bottle, sideline the stroller or pitch the pacifier?

Time to bump that bottle?

Are you wondering if it’s time to switch from a bottle to a sippy cup, but the idea of taking away your baby’s most prized possession stresses you out? So before you do bump that bottle, you want to be sure it’s really time? Well, ultimately, that choice is going to be up to you. But there are some points of view you can consider when making your decision.

The American Academy of Pediatrics suggests weaning your child from the bottle before 18 months because prolonged bottle use can cause tooth decay and can also encourage your child to drink more milk than he needs.

You should also talk to your child’s pediatrician and get his advice on when to transition from the bottle to a sippy cup. You can get tips on when and how to wean that work best for your individual situation.

Clinical psychologist Julia Simens warns, “Child development isn’t an exact science. There is no hard and fast rule for anything that pertains to child development. One family might have a child ready to give up the bottle at 12 months, but when your child is 12 months old it just does not seem right.”

Weaning baby from bottle to cup >>

Should you sideline your stroller?

“All of the items… including the stroller, pacifier and bottle are necessary, helpful and recommended for children. Any one of them used in excess over a specific age is counter-productive,” says Dr. Fran Walfish. When it comes to the stroller, Walfish believes that it is not needed for children over 4 years. “Unless the expected walking distance is far (i.e., a mile walk to the Synagogue).”

Prepare to pitch that pacifier?

“The pacifier is enormously helpful to infants and toddlers. It is recommended for babies as an aid to self-soothing at sleep time and during times of frustration,” says Walfish. “Many kids become dependent on their pacifiers and walk around the house and even outside with a pacifier in their mouths. This is excess.”

The American Academy of Pediatrics recommends weaning your child from the pacifier during the second six months of life because pacifier use after six months is assoicated with recurrent ear infections.

But Walfish says in her experience, most kids give up the pacifier between the ages of 3 and 4.

Although a new study reported by Health Day may have you wanting to pull that pacifier sooner. According to the research, pacifiers carry dangerous bacteria and researchers report that they found a wide range of disease-causing bacteria, fungus and mold on pacifiers that young children had been using. According to the study’s author Dr. Tom Glass, a professor of forensic sciences, pathology and dental medicine at Oklahoma State University, “the same types of bacteria found on a common pacifier have been linked to cardiovascular disease, metabolic syndrome, allergies, asthma and autoimmune diseases.”

Parenting guru: Too old for a pacifier? >>

Read more about your child’s milestones

What comes after the crib?
How to tell when your child is ready for potty training
Late walkers: When should Baby learn to walk?