Happy Wednesday Hump Day — also known to us as Celebrity Baby Bump Day! We have rounded up the cutest pregnant celebrities of the week, including Kristen Bell who was spotted showing off her tiny baby bump while walking her dog. Pregnant Shakira looked chic in Isabella Oliver leggings, while Sugarland’s Jennifer Nettles dressed her bump up for Christmas! Pregnant Gisele Bundchen (in a bikini!) and Holly Madison round out our list of cute pregnant celebrities of the week. 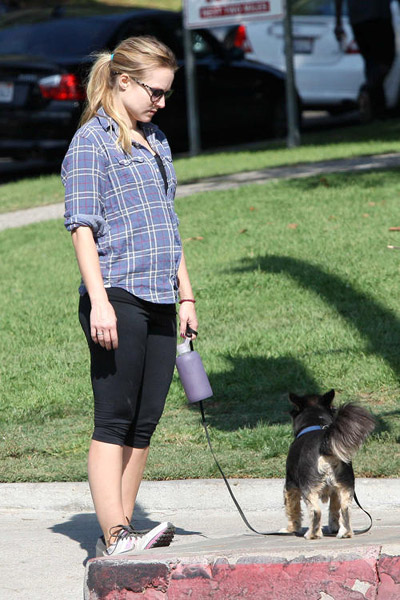 Actress Kristen Bell shows off her tiny baby bump in a plaid shirt and yoga pants while out walking her dog in Los Feliz, California this week.

Bell, 32, and her fiance, Parenthood star Dax Shepard,  are expecting their first child in late spring and sources say they are “ecstatic” to be parents.

“Kristen had a little bit of morning sickness early on but she just started shooting the second season of House of Lies and is feeling great now,” Dax told Jay Leno while appearing on The Tonight Show.

Dax went on to say that his mom is over the moon. “My mom is probably the most excited. It’s an unhealthy thing — I don’t recommend it — but she has a Google alert on my name, so if I do anything, she finds out about it, basically,” he joked.

The couple has been engaged for three years, however say they are holding out on a wedding. “The reason we’re not rushing to get married is because I don’t feel appropriate taking advantage of a right that’s denied to my [gay and lesbian] friends,” she said.

Next up: Get Shakira’s cool black maternity leggings