October was a big month in our household. We finalized our son’s adoption (our fourth adoption from foster care) and the next day, we left Galveston aboard the Disney Magic for a magical family adventure to the Caribbean. 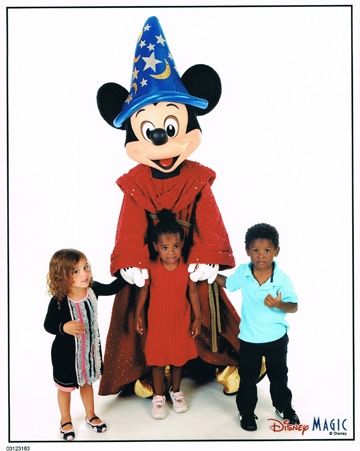 When I was first approached about the opportunity to take a Disney cruise, I was beyond excited. I mean seriously, who wouldn’t be? I grew up on Disney and my children were developing that same love for Mickey, Minnie and the rest of the Disney gang. As the day of departure approached, I showed the kids photos and videos about what to expect on the vacation. The concept of a cruise isn’t easy for toddlers to understand but they knew one thing — we were going on the Mickey Boat.

As my kids got more and more excited, I started to worry. Would it be difficult (impossible?) to handle four young children on a cruise? Sure, my husband would be with me but the kids can get rambunctious. Would the trip be more exhausting than fun?

The moment we stepped aboard the Disney Magic, my fears subsided. Everything about the cruise was spectacular. The itinerary was awesome (stops in Grand Cayman, Costa Maya and Cozumel) and the ship’s activities and amenities were through the roof.

I could write all day about all the amazing adventures we had, but that would take a book not an article, so I’ll highlight some of the most magical. 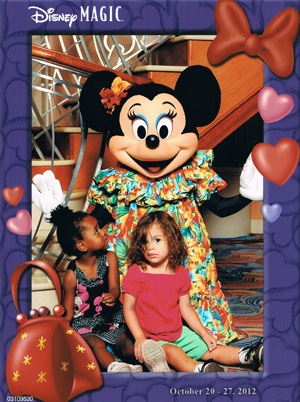 My youngest daughter, who just turned 3, was placed with us when she was 6 months old. And though she’s healthy now, she was very small and sickly at the time. In general, she was pretty miserable in those early weeks, maybe months. The first night in our home, she sobbed and sobbed. We tried everything to calm her down and then I remember that we were told that she “loved her Minnie.” Her Minnie was a lovie — a small fleece blanket with satin trim but with a character head — Minnie Mouse.

When my daughter learned how to talk, she referred to Minnie (on TV, in books and as her lovie) as “Mimi.” So when we embarked on the Disney Magic, her one goal was to meet Mimi. And meet Mimi she did.

On the Disney cruises, the characters are much more accessible than they are at the theme parks. All day long you can find scheduled appearances around the ship where children (and adults) can get their photos taken with their favorite characters. Then, on top of that, there are dance parties and other special events where the kids can interact with the Disney princesses, Mickey, Minnie and the other characters.

Not only did my daughters have their photos taken with Mimi a couple times — they also got to dance with her — actually hold her hands and dance with her. Never have you seen happier little girls. 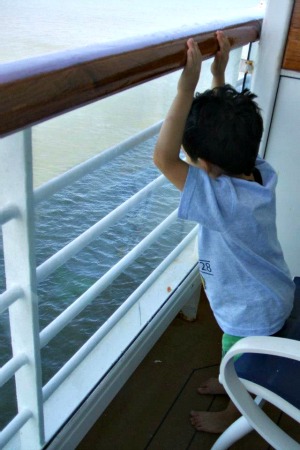 Aboard the Disney Magic, there were a lot of spectacular activities and events — from the complementary kids’ clubs to the magnificent Broadway-caliber shows. And all those things add up to one magic adventure, but it’s truly the little things that matter the most.

The verandah — OK, maybe this one isn’t so little. Our staterooms had private open-air balconies. They were safe (Plexiglas below the railing) and roomy enough for two chairs and a table. We spent many a morning gazing over the beautiful waters.

The robes — Oh my gosh, the robes! I don’t know if everyone had incredible robes hanging in their stateroom when they arrived, but we did. And they were oh-so-soft and wonderful. If you wanted more pampering than a soft robe and slippers, you could head to their world-class spa for everything from massages to pedicures to haircuts.

The food — In addition to terrific rotational dining in three different themed dining rooms, Disney cruises also offer a number of other food options. From an adults-only restaurant to a pool-side grill to a soft-serve ice cream stand to 24-hour room service, we never had to worry about finding something yummy any time of day (or night).

The towel animals — I can’t help but mention that the stateroom hosts on the Disney Magic clean up your room not once but twice a day… and they do a wonderful job. One of the small touches is that they create animals and other characters out of towels and leave them on your bed every evening during turndown service (along with chocolates for the eyes on the towel ‘animals’). The kids loved opening the door to find a different creation every night.

When asked about the difference between Disney Cruise Line and the others, cruise director Peter Hofer said, “It’s the people” and I couldn’t agree more. The people who work for Disney are top-notch. From our waiters (Nathan and Andrae) to our stateroom host (Kenneth) to every single person who assisted us along the way, the people are what made our trip special.

As I mentioned, I was a little wary about traveling with a 2-year-old son, two 3-year-old daughters and a 4-year-old son. I knew there would be tantrums and breakdowns along the way, but the Disney people made it so easy.

When my daughter cried for pickles at dinner, the waiter brought her a large plate of them. When my son fell asleep at the table, Nathan and Andrae tied two chairs together and made him a make-shift bed so we could continue to enjoy our meal. When my kids were bickering in line while we waited for the princesses, the Disney photographer scooped up my youngest daughter and played with her on the side. When my husband and I wanted some time together as a couple, the staff at the Flounder’s Reef Nursery watched my three younger kids while my 4-year-old played safely and happily in Disney’s Oceaneer Club.

The Disney staff doesn’t just a put on a happy face. They are actually happy to serve you and to get to know your family, and to make sure each passenger has a trip of a lifetime. And we did! 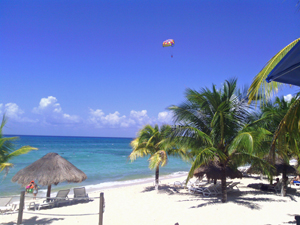 Cruising out of Galveston

Galveston is a new departure point for Disney Cruise Line and I couldn’t be happier about it. It’s about a 4-1/2 hour drive from our home in San Antonio and a great starting point for anyone in this part of the country. As I mentioned earlier, we had three amazing stops on our cruise. We visited the turtle sanctuary in Grand Cayman. We shopped and relaxed in Costa Maya. And we spent the day at a breathtaking exclusive beach club in Cozumel.

Since we’ve been home, my kids can’t stop talking about their time on the Mickey Boat. Hopefully, we have another opportunity to go on a Disney Cruise again. With so many activities and amenities that kids and parents can enjoy together (and separately), cruising with Disney is truly a magical experience.

Disney Cruise Line offers wonderful itineraries to Port Canaveral in 2013 with a day at Castaway Key and even a day to see Walt Disney World! Also, kids sail free from Galveston for a limited time.