We have rounded up the coolest and chicest celebrity moms that are on the covers of magazines this month. Halle Berry talked about her daughter Nahla to InStyle magazine, while Nicole Kidman opened up to Harper’s Bazaar. Connie Britton talked about being a single mom to her adopted son to Redbook, while Giada De Laurentiis graced the cover of Women’s Health. 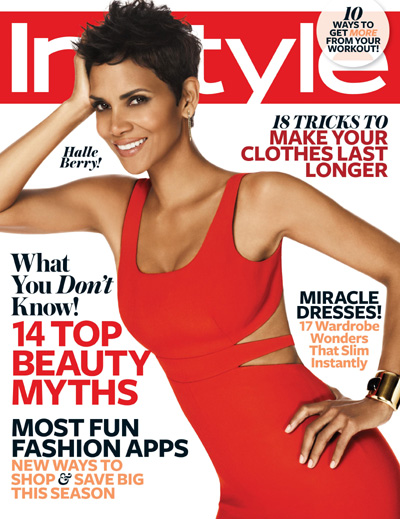 Halle Berry looked gorgeous on the November cover of InStyle magazine in a red Calvin Klein Collection dress. The 46-year-old Cloud Atlas star talked about her daughter Nahla and her love life.

On her daughter’s love for long hair:

“I think I am at my best when my hair is short. It’s easier to take care of and more of who I am. Women are conditioned to think we need long hair. I see that happening with my daughter. She is so in love with her hair right now. She says, ‘Look, Mommy — it’s so long!‘ As women, we think it defines us, and we learn that at a young age.”

On her fiancé, Olivier Martinez:

“When I first met Olivier, there wasn’t the initial ‘I’m in love!’ It was something that grew more gradually — and it feels more real because of that. He’s silly, a clown, and very much the life of the party, which is good for someone like me. Danny Downer… been there, done that. Now I like Louie Lightfoot!”

“It’s another one of those never-say-never things. I’m a hopeless romantic, and I won’t stop till I get it right!”

On her effortless style:

“Don’t be a slave to trends. People who are, never develop their own style. I have friends who are tragic — always trying to wear the latest thing, and it doesn’t always look good on them. I mean, that may be good on Kate Moss on the runway, but honey, you can’t pull it off.”

Next up: Nicole Kidman talks pregnancy rumors to Harper’s Bazaar

Photographed for InStyle by Giampaolo Sgura