What were on the minds and Twitter feeds of some of our favorite celebrity moms? Jessica Simpson shows off her 60-pound weight loss in her sexy Halloween costume, while Gwen Stefani tweets birthday messages and her voting ballot. Jersey Shore‘s Snooki tweets about the devastation from Hurricane Sandy, while Kendra Wilkinson and Tori Spelling tweet about their kids’ Halloween costumes! 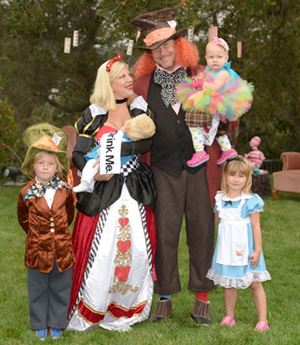 She also wrote about another cool party she threw for her Little Maven clothing line. (How can I get on her party invite list?)

“Last week we threw the official launch party for Little Maven, my line of chic baby and kids’ clothing with JCPenney,” Spelling continued on her website. “The theme of the day was glamping (glamorous camping, of course!) at Camp Little Maven… Camp Little Maven included everything from a faux campfire, s’mores station, crafting tables (obviously), a fishing pond, and designer teepees (designed by moi) plus so much more.”

She also tweeted an adorable photo of Hattie’s Halloween costume. “Here’s Miss Hattie, looking pretty edible in her #DIY #Halloweencostume!,” Spelling tweeted with a link to a photo of Hattie in her spaghetti-covered costume.

“The sneezing in my house began at 6am. Must be the morning after Halloween. They always get sick. #AtLeastWeHaveConsistency” she wrote Thursday morning.

“Happy Halloween!!!” Jessica Simpson tweeted, with a link to a photo of her showing off her 60-pound weight loss in a milkmaid costume that showed off her slim waist and cleavage.

Her 6-month-old daughter Maxwell Drew was adorable as a chicken and fiance Eric Johnson dressed like a character straight out of Braveheart.

It sounds like Maxwell had a Halloween costume change that day! “Maxwell wanted to be a monkey too,” Simpson later tweeted.

It was one year ago that Simpson announced her pregnancy with a tweet in which she wore a mummy costume that showed off her baby bump with the caption, “It’s true…I’m going to be a mummy!” 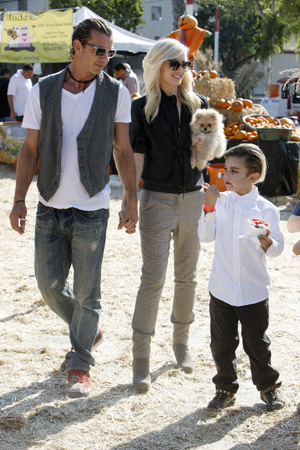 “Happy b day @GavinRossdale kisses,” tweeted Gwen Stefani to her husband, Bush frontman Gavin Rossdale. The couple was recently spotted holding hands at the pumpkin patch with their son Kingston, who was dressed as a vampire.

“Just voted! Do it!” Stefani tweeted, with a picture of her voting ballot.

“Really??!!” she later wrote, with a photo of her meeting President Obama.

Jersey Shore star Snooki tweeted her concern for the place that made her famous.

“Seaside Heights suffered bad from the hurricane and my prayers go out to everyone affected! We are all fine here…love you JS,” Snooki tweeted.

“Still have no power & seeing pictures around the area is devastating,” she later wrote. “Ugh trying to change my son’s diaper while holding a flash light is not easy. #nopower”

“At my moms In ny where there’s electricity!! Baby & I are good!,” she later tweeted.

“Another movie night with my fam with candles & flashlights,” she said. “Halloween is postponed for us..but Happy Halloween to everyone!“

For those Sandy victims who love platform heels and leopard-printed tops, Snooki wrote, “Cleaning my closet today to donate clothes and whatever I can do the victims affected by sandy! I’m comin with clothes!!!!”

“Happy Saturday! What r y’all up to today?! We are getting ready for our annual Halloween Party! This years theme #LacheyBoneyard,” tweeted Vanessa Lachey.

“You know you’re a new mom when you get excited about packages filled with nursing bras and nursing cami’s… Thank You @leadingladybras!” she later wrote.

“I think one of my favorite things to do is sing Camden to sleep. Babies don’t judge, they just love your voice. Go for it Mom & Dad!!!” she later wrote.

“Lil Hank was a firefighter for Halloween. We are sooo tired now. Zzzzzzzz,” tweeted Kendra Wilkinson. “Lil Hank was so cute while trick or treating. He ran inside the first home we went to looking for candy. Awesome Halloween.“

“We just took Lil Hank to the pumpkin patch. He didn’t get the point of the hay ride… But I didn’t either. Hahahaha,” she wrote. (Can’t you just hear her laughing as she wrote that?)