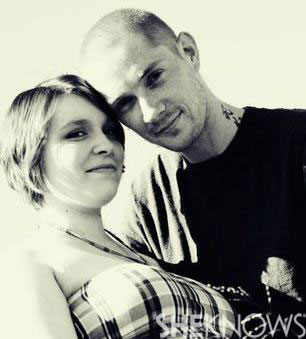 I think the hardest part of being away from family, for my husband, was coming home eight years later and everything had changed. People had grown up, gotten married, gotten older. It was still coming home, but to a time-lapsed version. He would write and send pictures in emails while deployed, and if you were very lucky, he’d walk a mile to a phone and call you on your birthday. Those were the most exciting and heart wrenching.

We were home from Virginia Beach (where he had been stationed) exactly one month when we found out we were pregnant with our daughter, Emily Harper. She was his first and my second, and so it was a very special experience for him. We had waited until he had finished his enlistment to have a baby, because he had watched friends of his miss the children’s births, first words, first Christmases. He says he feels lucky every day he got to be here for those things, and we pray every day for the brave men and women who can’t.

My husband is the strongest person I know, in every way. He carries a sense of pride and dedication with him in all he does, stemming from his eight years of service.