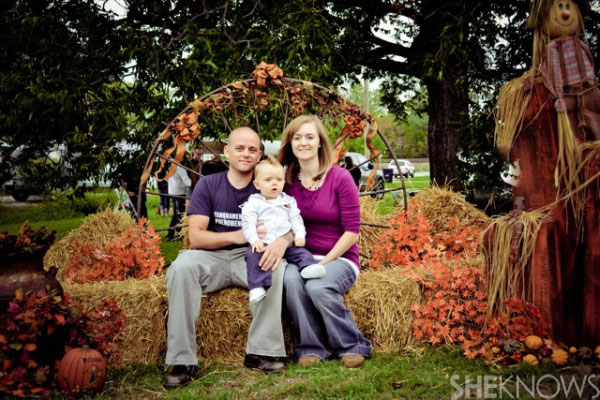 Mark is currently serving in the U.S. Air Force.

When my husband and I were just married, I was active duty as well. He ended up getting orders to Grand Forks, North Dakota and I tried my hardest to Join Spouse (an option the military gives you if they have availability at the base you’re trying to PCS to) but since he got orders a month before we got married they wouldn’t allow a Join Spouse. Then I tried to BOP (base of preference — an option given to members that have been stationed at a base over a certain amount of time, usually always granted to 1st Term Airmen — which I was at the time) but since there wasn’t any availability they couldn’t PCS me.

So our first year of marriage we were separated by 1700 miles, and only got to see each other for two weeks out of the year for the holidays. We both deployed during this time, but to separate locations (a 45-minute flight away). This was the hardest part for us because it took a deployment to get us this close. The only thing that kept my spirits up was the fact that as soon as I got back to California I’d start out-processing for separation and would be moving up to North Dakota to finally get to be with my husband and start a family.

We would be able to call from work occasionally, and they provided “moral phones” in the community center where you could call anyone during your down time. But the best way (in my opinion) was Skype. They had a wireless network in the dorms as well as around the living quarter’s side of base so that pretty much no matter where you were or if your roommate was sleeping you’d be able to get online and contact your family.

On my fourth deployment (out of six), as we were flying back stateside we hit a head wind which caused us to burn a lot of fuel. We had to stop in Bangor, Maine to refuel. During refuel, they let us off to stretch our legs (after a 15-hour flight). As we were making our way down the halls and into the terminal we were greeted by hundreds of people wanting to thank us for serving our country, shaking our hands, giving us hugs and telling us how much they appreciate our dedication to serve. Complete strangers. It was such an overwhelming and proud moment for me that I knew I was doing the right thing for my country.

Deployments, Exercises, and 12+ hour shifts come with the territory. But you made a commitment to your country, and you have no option but to grin and bear all the frustrations and disappointments that come along with serving. You take the good with the bad, and you learn to adjust quickly. For deployments it’s hard for the first two to three months but then everyone gets into a “groove” and you get into a routine that sort of makes life a little easier.

Skype is a wonderful tool for younger children that don’t understand why Mommy or Daddy are gone for long periods of time. They also provide video cameras and children’s books so that you can “read” to your little ones. The fact that I’ve seen both aspects of military life makes things easier for my family. I know all the frustrations that go along with trying to get everything ready to leave and the ache of missing home each passing day, knowing you’re one step closer to coming home.

For most military members (that I’ve met), being in the military is just another job. In most cases, serving their country was not the initial reasoning for joining but usually the educational benefits, traveling the world, health care or a steady paycheck. It’s only after you join and you see all the support that the country and your community shows military members that you feel honored to serve your country. For example, when the National Anthem plays on base (every day at 5 o’clock) and you see everyone outside stop what they are doing and put their hand over their hearts (even young children) that you truly feel proud to be military, or on Memorial Day where people take the time out of their day to go put flags on all the headstones of the veterans that lost their lives serving. It’s the little things that make you proud to serve.

20 mins ago
by Ellen Niz