Liz Wilson, mom of two daughters, has turned her love of baking into some of the most amazing, unique cakes you will ever lay eyes on — or taste. Liz’s “mom” hobby has become much more than it started out to be, thanks to her creative eye and natural talents. 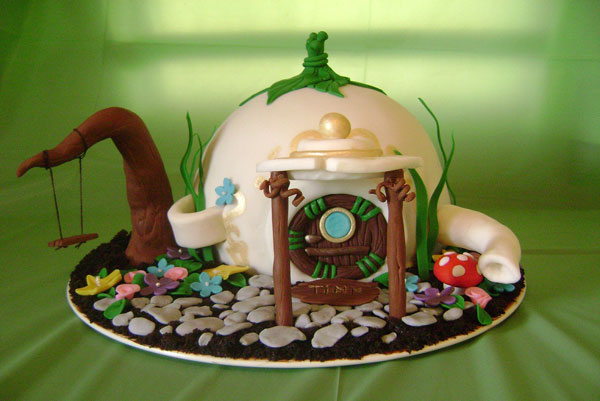 The cakes from Eat Cakes are more than simple desserts. Not only are they delicious, they are so creative and realistic you might not believe that they are edible. But they are. And Liz does it all from her small Iowa kitchen, with her husband and daughters by her side.

SheKnows: Liz, share with us a little bit of background. Tell us about your husband and kids.

Liz: I met my husband Allen online in 2001. After a few months of knowing each other, I took a risk and moved from Buffalo, New York to Iowa where he lived. We got married two years later and now we have two little girls, Evelyn who is 7 and Aubrey who is 4.

SK: Where did you grow up, how many siblings did you have?

Liz: I grew up right outside of Buffalo, New York in a little town called Depew, and I have one older sister named Shannon.

SK: What was your life like as a child?

Liz: Not very good, to be honest. I was made fun of a lot, mostly for my weight. I was also a smart kid and liked helping out, so I got the whole “brown-noser” thing a lot when the truth was that I didn’t ever feel like I fit in with any of the people my age. My parents had a very difficult marriage which made home life less than ideal, they ended up separating and eventually divorcing when I was 13.

Sowing the seeds for baking

SK: Did your parents do a lot of baking when you were small?

Liz: Not at all. My mom baked a little, but more than that we would make chocolate candies together for holidays, the kind you melt and pour into molds. That was something I remember doing from the time I was really young and I actually have the same molds to use with my own kids now.

SK: When did you start learning how to cook, and what sorts of thing did you make when you first started out?

Liz: I can’t ever remember not cooking, to be honest. I’d guess around 6 or 7. I started out
with eggs, because they are easy to cook! My sister and I used to make all kinds of scrambled egg concoctions. She’s four years older than me and I remember learning a lot about basic cooking from her.

SK: When did you start making cakes?

Liz: I started making cakes probably around the time I was 10 or so. I loved baking, and cake has just always made me feel good, it’s always felt right.

SK: How did you go from “regular” cakes to the amazingly detailed specialty cakes you create today?

Liz: Well, when I was younger, making cakes “pretty” wasn’t a concern at all. As long as they weren’t burnt and didn’t fall apart, that was totally good enough for me. Then in high school I was in French Club, and we had a bake sale. I made a Black Forest Cake — chocolate cake filled with cherry pie filling, smothered in whipped cream and chocolate curls [on top]. It looked super delicious and I felt pretty proud, but even more so when I found out that two older girls had pooled their money together to buy it because it looked so good. That was the first time I ever really thought about taking cake to the next level.

After that it was years before I thought about it again — after high school I went to college for art and then moved to Iowa and became vegan, so I barely baked for a few years. Then we had Evelyn, and as her first birthday started approaching I couldn’t imagine anyone else making her first cake. I had this doll cake for my first birthday and I wanted to recreate it for hers, so I did. Once I did that cake I didn’t stop making cakes; everything just seemed to fall into place.

SK: How did you decide to make a business out of your creative love for cake baking and decorating?

Liz: At first it was just something I liked to do, but once people saw what I did (which wasn’t even that great back when I started out) they wanted to buy my cakes. It was pretty shocking to me but I figured, why not get paid for something I enjoyed doing.

SK: How did you decide on the name, “Eat Cakes?”

Liz: Well like I said, I was teased a lot when I was little for being fat. Part of what I was teased about was my name. More specifically, my initials, which were E.A.T. Growing up as a fat little girl, I’m sure you can imagine that having E A T as your initials is just fuel to bully fire, and I was tormented constantly for it. So a couple years ago, when we were in the process of ordering new business cards, my husband asked if I was in love with the name we had previously chosen. I wasn’t stuck on it, and asked what he thought I should name it instead, and he suggested Eat Cakes, as a way to turn something so negative into something positive.