From the recent arrest of a student on felony charges stemming from a food fight to toilet-papering houses being considered vandalism, the face of the innocent teenage prank has changed. 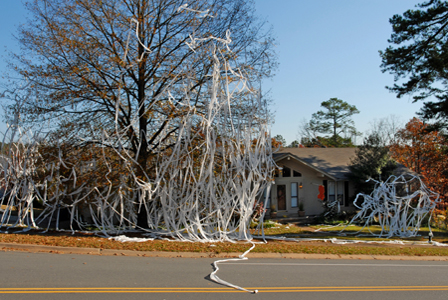 Teenage pranks are nothing new, but they certainly carry steeper consequences than when we were kids. What should you know about the liability of pranks, and what should you tell your teens?

Most of us can remember playing pranks as teenagers — usually innocent fun. YouTube videos have taken modern-day teenage pranks to a whole new level, giving teens not only an outlet for their creativity, but a new place to scout for ideas. Have teenage pranks gone too far?

An Arizona teen is facing felony charges stemming from a food fight in his high school’s cafeteria last spring, where a teacher alleges he was tackled and knocked to the ground by the student. In a statement from school officials, they referred to the food fight as “… a dangerous, physical assault that put the safety of hundreds of students and staff members at risk.“

For teens participating or observing such a prank, it may be hard to tell where the line is drawn between harmless fun and felony assault. YouTube is full of videos captured on cell phone cameras of school cafeteria food fights, providing an immediate outlet for teens instigating such pranks.

Five teenagers were arrested in a toilet-papering incident at a Boston area high school last month and charged with malicious destruction of property over $250, defacement of real property, conspiracy and trespassing. Felony charges were also brought against the teens because they used chains to secure the doors of the school buildings.

Many teens — and even their parents — consider toilet-papering (TPing) someone’s home and yard a harmless prank, but Davis California police officer Ton Phan feels differently. “TPing is a crime because it is defacing property that is not your own,” says Officer Phan. “We don’t go out and actively look for TPing people,” he adds. “We usually get a call and we go check it out.” Officers who catch someone in the act of TPing another person’s property will make them clean it up, but property owners can opt to press charges.

Parents get in on the action

The latest odd twist on teen pranks may just be who their sidekicks are — Mom and Dad. In an effort to set the worst possible example, a Texas mom has been charged as an accomplice in a toilet-papering and vandalism attack on a neighbor’s home that caused an estimated $6,000 in damages. She allegedly joined forces with a group of middle-school kids to toilet-paper the neighbor’s trees and paint graffiti on the outside walls of their home using Sharpie pens and mustard. The group also left raw chicken in the mailbox, and ketchup-soaked feminine products on the front lawn.

While parents may feel that they are simply protecting and escorting their teens in harmless fun, by participating they also put themselves at risk for charges. The Texas mom was charged with felony criminal mischief for the alleged incident.

How to build a relationship with your teen >>

Teens and their parents need to be aware of the potential for liability when they instigate pranks such as toilet-papering or food fights. According to the California Penal Code, the punishment for vandalizing a property if the resulting damage is less than $400 is one year in jail or a fine of $1,000. Aside from the potential for property damage and fines, there is always the chance that a prank will result in someone being physically injured. Talk with your teens about pranks in terms of intent. If the intent is to cause damage or hurt someone’s feelings, pranks more closely resemble vandalism.

Being involved in pranks — even just from the sidelines — can cost your teen jobs, scholarship opportunities and friendships. Help your teen stay on the right side of the law by encouraging fun activities with friends like making funny videos that don’t involve the property of others.