We’ve all had the discussions with our teens about underage drinking, yet alcohol is readily available to them. For many teen girls, it has become the most important component of their social life. When alcohol becomes her BFF, the problems become serious. 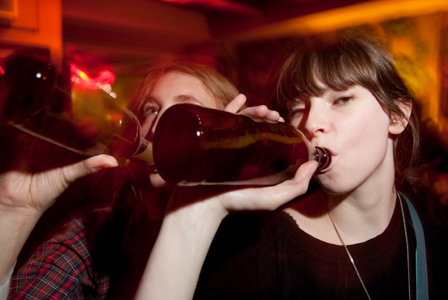 Underage drinking continues to pose a huge threat to the health and well-being of our teens — and girls may be at a greater risk than boys. What starts as something fun and daring may quickly turn into a crutch she can’t manage social situations without.

Binge drinking is a big problem

Teens may only consume alcohol at parties rather than drinking on a daily basis, then think they have their drinking under control. Binge drinking — generally considered four or more drinks at one sitting for women — has become common among younger people. “Binge drinking used to be mainly a problem found on college campuses and in fraternities or sororities, but it’s on the rise among young adolescent girls and places them at greater risk of physical and emotional problems,” says Scott Bienenfeld, M.D., medical director of the New York Center for Living.

According to National Institute on Alcohol Abuse and Alcoholism statistics, even though young people drink less often than adults, they make up for it in volume. The effect of multiple drinks in a short period of time is amplified in girls. “Girls have less of the enzyme required to break down alcohol than boys do,” adds Bienenfeld, “so they become intoxicated more quickly with less alcohol and remain intoxicated longer.“ Impaired judgment makes girls more likely to engage in risky behaviors, and puts them at increased risk of physical or sexual assault.

Did you know volunteering decreases substance abuse in teens? >>

What could make the issue of binge drinking even worse? Combining disordered eating habits — such as purging and calorie restriction — with heavy consumption of alcohol has become popular among many young girls. Researchers at the University of Missouri led by Victoria Osborne, assistant professor of social work and public health, found that 16 percent of those surveyed reported restricting calories to ”save them” for drinking. Women were three times more likely to engage in this behavior — dubbed drunkorexia — than men. Their reasons included getting intoxicated more quickly, preventing weight gain and saving money for alcohol that would normally be spent on food.

Drunkorexia not only puts people at risk for serious addiction issues, but also poses dangerous cognitive, behavioral and physical consequences. ”Apart from each other, depriving the brain of adequate nutrition and consuming large amounts of alcohol can be dangerous,” warns Osborne. “Together, they can cause short- and long-term cognitive problems including difficulty concentrating, studying and making decisions.”

Could your teen have an eating disorder? >>

When girls begin to rely on alcohol to help them navigate social situations, it becomes a hard habit to break. The false sense of confidence that alcohol provides makes her feel popular, and can quickly become a must-have for any social outing. Bienenfeld shares a few questions young girls can ask themselves if they feel they may have a problem.

”If the answer is yes to any of these questions, you should really think about getting help,” he says.

If your daughter approaches you about her own binge drinking or concern about a friend, take it seriously. With the help of an addiction specialist, things can turn around for your teen.

More on teens and risky behaviors