What were on the minds and Twitter feeds of some of our favorite celebrity moms this week? Heidi Klum shared her elaborate Halloween costume, while Jennie Garth shared cute snapshots of her daughters playing soccer. Teen Mom Leah Messer tweets about being pregnant again, while pregnant actress Tamera Mowry is anxiously awaiting the birth of her first child. 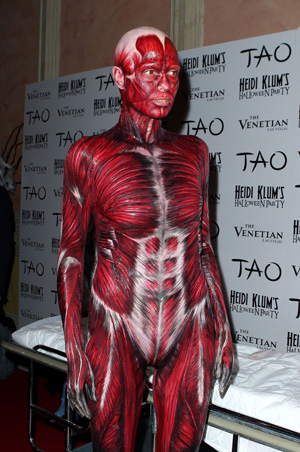 Every year Heidi Klum goes all out for Halloween and throws a huge Halloween bash in which she wears an elaborate costume. Case in point, check out her pictured bloody costume from last year, which was painted to look like she had no skin. Ewwww!

“One week until Halloween Here’s a sneak peek at my crazy Cleopatra costume!” she tweeted, with a link to her in an elaborate gold gown.

“Today, you’re getting a sneak peek at my ensemble before I debut the complete look to the world at my annual Halloween party at FINALE Nightclub in New York City,” she wrote.

On her website, she talks more about her costume, writing, “The making of my costume is quite an elaborate process. It takes months of planning and a team of expert designers to put it all together. Costume designer Martin Izquierdo has been creating my costumes for me for years. He’s amazing!”

No word yet on what her kids, Lou, Henry, Johan and Leni, will wear for Halloween this year — but we are sure they will be adorable!

Jennie Garth may be in the news for her recent dates after divorcing Twilight actor Peter Facinelli, but this single mom is focusing on her three kids.

“My soccer babes! Btw…Ladybugs remain undefeated!! (Not that I’m keeping score or anything)” she tweeted, with a link to a photo of her kissing her daughters.

“And Lola SCORES!!!” she later wrote. “You gotta give it up when a defender takes her shot!! #proudmama”

She later tweeted an adorable photo of her daughters Lola and Fiona in a tree with the caption, “A little tree climbing before school #monkeys #love.”

“We are the McDermotts, and we are pumpkin patch-aholics,” tweeted Tori Spelling, with a link to photos of Liam and Hattie surrounded by pumpkins.

Newborn Finn may have stayed at home or in his stroller for the pics, but where was Stella? “Stella was way too into the inflatable pumpkin slide to pose with pumpkins,” Tori wrote.

“I wonder what Hattie is thinking in this pic,” Tori later wrote, with a photo of Hattie sitting in her highchair covered with spaghetti. “1 thing I know is that Ive got a messy (&adorable) eater on my hands.” 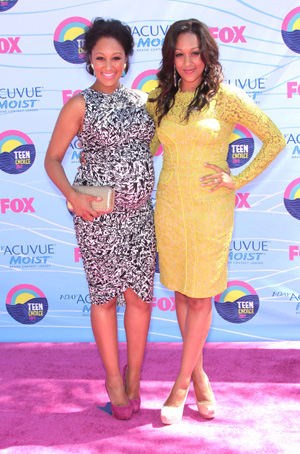 “Learning to enjoy the peace and quiet now before I deliever my lil angel,” tweeted Tamera Mowry, who is expecting her first child very soon with her husband Adam Housley.

“Thanks @peoplemag for making @adamhousley and I your top story today!” she later wrote, referring to the story where she opens up about her last few weeks of pregnancy.

“I can now say that I am down to the wire. I seriously feel like I have been pregnant forever. Almost 10 months to be exact! Thirty-nine weeks in and no baby yet,” she told People.

Teen Mom 2 star Leah (Messer) Calvert is expecting her third child, however it is her first with her husband Jeremy Calvert. She announced the news on the Teen Mom 2’s third season premiere. She has two daughters, Ali and Aleeah, with her ex-husband Corey Simms.

“THANKS SOOO MUCH EVERYONE! #PositiveTweets makes this momma soooo happy!!! @Calvert505 are in such a good place!” she tweeted after the news was made public.

“The path I choose for my life and that’s right for me, isn’t always the right path for everyone else!” she later wrote.

“TM2 Season 3 Trailer is crazyyyy! Looking back now, all the hard times we went through was worth it all in the end. Who all is excited??” Messer tweeted.

12 hrs ago
by Ambrosia V. Brody