Ella Thompson is a 7-year-old with Down syndrome. Her mom, Jenny, is working to build Ella’s self-confidence so if she’s ever confronted by someone using hurtful language, she will have the courage to stand up for herself. 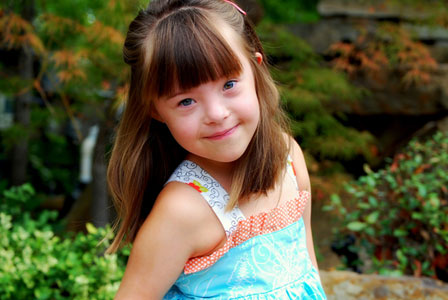 As the special needs community reacts to Ann Coulter’s repeated and intentional use of the “R“ word, parents and organizations encourage taking this opportunity to educate children on compassion and bullying.

When Ann Coulter tweeted the “R” word the first time, it drew criticism and the wrath of parents and advocates of people with special needs. She did not respond to public demands that she apologize.

Ignoring the reality that her insults hurt a nonpartisan community, she tweeted the word again after Monday night’s presidential debate, referring to President Barack Obama.

To date, she has defended her use of the word, calling criticism “political correctness.“

Arguably, Coulter earns her salary by adding an inflammatory flair to any issue leaning left of far right. But Coulter has mistaken the special needs community for a vulnerable target for her bullying. When you poke hundreds of thousands of mama bears, nature is going to swipe back unrelentingly.

“I got outraged at first, thinking how can she be so selfish to do this,” says Jenny Thompson of Fort Smith, Arkansas, mom to 7-year-old daughter, Ella, and 4-year-old son, Silas. Ella has Down syndrome. “Then I break down, thinking about my daughter hearing that word.

“The hard thing with Coulter is that her [use of the word] is intentional. She could easily choose her words a different way.”

Jenny’s husband, Kevin Thompson, lead pastor of Community Bible Church in Fort Smith, (@kevinathompson) tweeted Tuesday in response to Coulter: “We don’t get to choose what words hurt others; we do get to choose whether or not we use those words. Choose wisely.”

“We can all learn from this situation,” Kevin told SheKnows.com, “It is a scary thought to consider how inconsiderate I am without even knowing about it. When I say, ‘that kills me,’ when talking to someone whose loved one was murdered, or ‘I wanted to blow my brains out’ to the person who had a friend [who] committed suicide or ‘do you want my kid?’ to the person who can’t get pregnant, I’m being just as hurtful as Coulter.”

Parents, talk to your children

One conversation may mean the difference between your child learning to show compassion for others and, well, let’s face it… your child becoming the next Ann Coulter. But where to start?

“After the watching the movie The Help, I decided I needed to start building up Ella’s self-image so that when she’s later confronted with hurtful comments, she will have a solid foundation on which to stand,“ says Jenny Thompson.

“Nearly every night, we sit in front of her mirror and she says, ‘I am smart, I am beautiful, I am important and I am loved by God.’

“We’re never going to be able to completely protect our children from all the hurtful things people say in life, so we must ensure they are confident in who they are, who God created them to be and by whom they are loved. That is our very best weapon against an often cruel world.”

Lisa Morguess of Fullerton, California, has seven children, including Finn, who is 4 and has Down syndrome. When Finn was born, “we explained to them that they had probably already heard other kids at school say ’retard’ and ’retarded,’“ Lisa says. “When people say those things, they mean to be funny, or to express that they think something or someone is silly or dumb or ridiculous, but what they’re really doing is saying something very mean about kids like their brother, Finn, who will take longer to learn things because he has Down syndrome. It’s never OK to say mean things like that about anyone.“

Teachers, talk to your students

Experts have responded to requests from the education community to provide help in talking about inclusion and bullying.

Easter Seals has developed a free, downloadable program for educators called Friends Who Care, sponsored by Friendly’s. The program is described on the Easter Seals website as a “disability awareness program for elementary students, developed with the goals to encourage typically developing children to accept their peers with disabilities as people first and also to find ways to include everyone in school and after-school activities.“

StopBullying.org offers tips on discussing bullying, including a free toolkit for teachers, and free training in conjunction with The U.S. Department of Education and its Safe and Supportive Technical Assistance Center. The training focuses on best practices to stop bullying and to prevent bullying before it starts.

The Council for Exceptional Children addresses bullying of gifted children and those with disabilities because, as one researcher explains, “Differentness contributes to vulnerability.”

Grown-ups, talk to each other

Coulter’s language selection also can prompt a conversation among friends about using words like “retarded” and “retard.”

Concerned about how to respond if someone argues it’s OK to use the word? Quote this parent of a child with Down syndrome.

“People perpetuating negative, inaccurate and outdated stereotypes is the biggest barrier the National Down Syndrome Society faces in achieving acceptance and inclusion of people with Down syndrome,” says Julie Cevallos of NDSS. “Every person who thinks before they speak, teaches their children and respects people of all types is leading the way and helping every day.“

NDSS has posted a position paper on use of the “R” word and tweeted it after Coulter’s second tweet using the “R” word.

Read more about the “R“ word

Dad to Ann Coulter: Apologize!
Why Ann Coulter doesn’t matter but words do
One mother’s plea to stop use of the “R“ word