While your little ones might not be able to rock the vote yet, they can still show some patriotic pride for this year’s presidential election! We love these fun choices for kids and babies that show where your family stands politically, including some options that show some pride for our nation in general.

For families who swing to the left 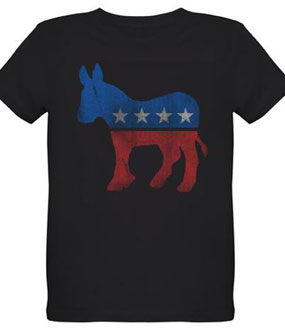 Democratic families go urban with this cool Democratic Donkey T-Shirt ($20, CafePress) and just as it should be for any die-hard democrat kiddo, it’s made from naturally grown organic cotton so that you can show some love for the left and be green at the same time. 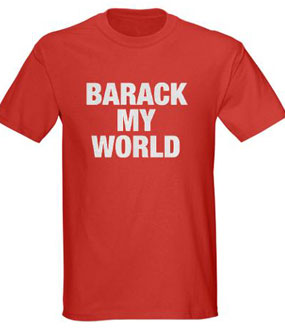 “Barack my world” is the hippest new way to say “Four more years.” We think this fresh slogan is a nice alternative for kids who want to make a political statement without rocking the typical Obama logo. ($27, CafePress)

One of the hottest celeb moms also has some Obama gear for your kiddos. Beyonce and mom introduce Obama-inspired baby clothes >>

For families who swing to the right 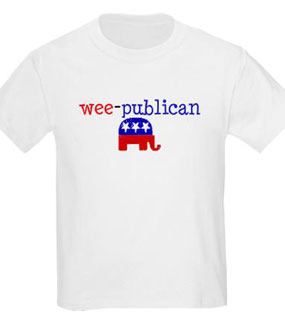 You have to admit, no matter which side of the political fence you stand on, that little Republican elephant is pretty cute and with a phrase like “wee-publican,” taking a stance on politics couldn’t get any more adorable than this. ($16, CafePress) 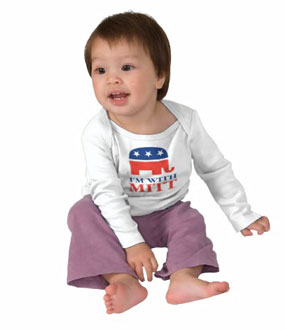 If you’re checking the Romney/Ryan box on your ballot this November, the fact that this “I’m with Mitt” shirt ($22, Zazzle) will have you smiling all the way home from your polling place as you think about how your kids know the potential next president by his first name — like he’s your next-door neighbor.

Patriotic pride, minus the parties

We understand if you’d rather keep your own political opinions from your kids. After all, they can’t vote yet, let alone choose which political candidate they prefer (and who is wearing the coolest tie on the debate doesn’t really count yet!). Instead of a shirt that endorses one side or the other, let them show a little patriotic pride this election day focusing on the good old red, white and blue, reminding us that no matter who your choice for president is this year, we’re all American. 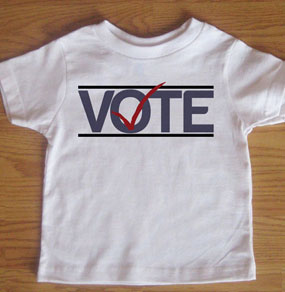 Teaching your kids about the basics of the presidential election and the voting process can be done no matter what their age, and in this Patriotic VOTE Shirt ($16, VicariousClothing on Etsy), they are sure to get some smiles from adults who have already been to their polling places or it may even serve as a reminder to those who still need to go! 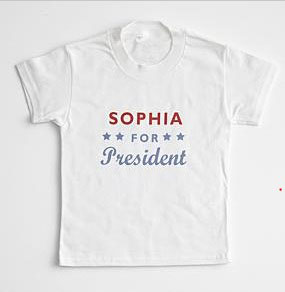 If you asked your child who they thought should be the next president of the United States, it’s likely that they will tell you that they want the job themselves! How fun are these personalized President Kid’s T-Shirts ($16+, Ink Pixi), where your kid instantly becomes the hottest new candidate on the ticket for the 2012 Election.

Talking to tots about the presidential election
Election 2012: What moms should know
NBC to air SNL election spoof for the 2012 election

The Best Hiking Shoes For Kids

23 hrs ago
by Amanda Hambrick Ashcraft