On November 6, 2012, the entire nation will watch as we choose the next president of the United States of America. There’s no reason why your kids can’t watch with you as the states turn red and blue on the broadcasts as the results roll in. 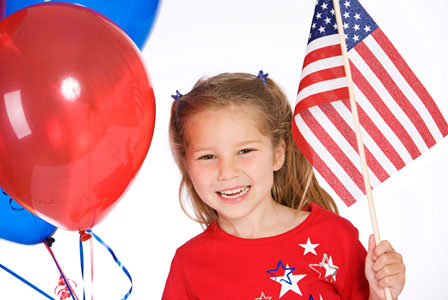 Make Election Day a family-friendly event and use it as an opportunity to teach your kids about the importance of voting.

Considering 4th of July is still months away, it could be challenging to find patriotic party supplies, unless you have one of those amazing party supply super stores nearby! Oriental Trading Company is a great resource for everything that sparkles red, white and blue, from decorations to fun hats to mini-American flags. And, they ship quickly, so there is still time to place an order and have it arrive by November 6.

If you’re aiming to keep things a little more low-key, red, white and blue balloons go a long way to transform your home into a patriotic palace. Or, get your kids involved in the decorating action, having them make American flags to hang around the house. Having a party where everyone attending is voting for the same candidate? You can go crazy decorating with Obama or Romney swag — both have campaign logos that are fun and could easily be recreated at home to be used as window decorations. The most important decoration you’ll need at an Election Day party is a television to watch as the numbers roll in from across the nation!

These 4th of July crafts for kids can easily double as Election Day party decorations! >>

Traditional party games have never been as fun as they are on Election Day and it’s so easy to adapt games that your friends and the kids already know into Election Day versions. Instead of “Pin the Tail on the Donkey,” try “Pin the Beard on Abe Lincoln.” A favorite like “Duck, Duck, Goose” can become “Governor, Governor, President.”

Take things out of the ballot box (pun intended!) and create your own mini-mock election at the party! Pick two kiddos to run for president, including funny hats for speeches, debates on issues about whether chocolate or vanilla ice cream is better and a vote at the end of the night to “elect” the president of the party. Not only will it be fun and a great way to kill the time between election results, it’s a good chance to teach your kids about the basics of the election process.

Make it fun for the adult guests too! Before they arrive or just as they walk in the door, have them write a list that predicts the order that the state results will be announced. Or, make it even easier with having them guess which states will turn red on the screen and which will turn blue.

Keeping it in the purple zone

Even though presidential elections are all about politics, when throwing a kid-friendly Election Day party, it’s best to leave politics aside, as to not turn the party into the fourth debate where both candidates went off script and said what they really wanted to. There’s nothing wrong with rooting for your candidate at the party, but warn your adult guests that any potentially heated political discussions are off-limits. We suggest putting a sign on the door that reminds guests that your house is a “purple zone” — where red and blue come together to have fun on Election Day.

10 hrs ago
by Allie Merriam