Power mom Janice Min is the editorial director for The Hollywood Reporter and the former editor-in-chief of US Weekly. 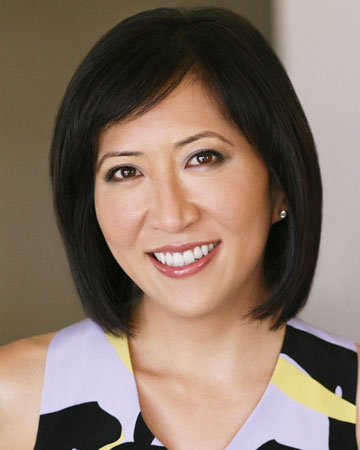 She’s also the author of a new book, How to Look Hot in a Minivan. She dishes on mom guilt, bouncing back after Baby and more.

Some moms just seem to have it all together. Janice Min, author of How to Look Hot in a Minivan and editor of The Hollywood Reporter, is one of them. But beneath the surface, she’s a mom who’s just doing her best — like the rest of us.

Min is a mom of three who has managed an intense and high-profile career while raising a family. She was on the rise in her career when she decided to start a family — it might seem like bad timing, but it was just right for her.

“Ninety-nine percent of women will feel like there is never any ‘perfect’ time to have a child. Your house will always seem too small, your paycheck not enough, and your career in a place where having a child might not seem advantageous,” says Min. “Everyone has to make the right choice for herself, but I would suggest that if you really would like kids, you bite the bullet and get going.”

For Min, becoming a mother actually helped her career a little too. “I’d like to say that becoming a mother probably made me a better manager, and really, a better person because I developed a level of empathy I don’t think I had before. Also, it’s worth pointing out, I’ve never seen more efficient people at work than working mothers. We really know how to cram it in,” says Min.

We’ve all experienced it at one point or another: The dreaded mom guilt. Whether it’s feeling like we aren’t there for our kids enough or that we are being selfish by having a cup of coffee, we should really let it go. “We make sure everyone in the family — including the pet dog! — are eating well, groomed, and are well turned out before we pay any attention to ourselves. We deserve our own best efforts too,” says Min.

In How to Look Hot in a Minivan, she discusses a study that found kids wish parents would be less stressed out. “Most of us probably thought — or hoped — our kids’ answer might be that they wanted more time with us. The fact is, we already spend so much more time parenting today than any generation before us, even when so many of us are working,” says Min.

So that afternoon at the salon or hour at the coffee shop? They are A-OK, especially if they will make you a less stressed mama. “To be clear, I’m not saying go turn into the ’Real Housewife’ of your town. But much like the free–range kid movement, I like the idea of being a free–range mom once in a while,” says Min.

Bouncing back after Baby

Stuggling with post-baby weight loss? Been there! Min recently wrote about how four months after giving birth, her manicurist asked her when she was due (eek!). So she knows first-hand what a challenge it can be.

But Min says by making healthy choices, you can do it. Her book includes nutritional advice and work-out ideas from Hollywood’s best trainers and nutritionists that she says can be used by anyone — not just celebs. “We’ve all been on that precipice after giving birth where you think you may never lose the weight and the choice is to either let it all go and give up, or keep trying. If you keep trying, I guarantee it will happen. You may never look exactly the same again since pregnancy rearranges things differently than they were before, but you can get within pounds of where you once were if you eat wisely and exercise,” says Min.

Being a successful editor and author doesn’t make Min perfect. In her book, Min talks about the Top 10 Mom Mishaps — and she’s guilty of some too! “I’ve definitely tried to put on clothes that are too small. That’s when you develop fat rolls you didn’t even know you had. Not pretty. When the label says one size, and your body says another, it’s time to size up,” says Min.

She’s also hanging on to a few Juicy track suits. “For some reason I can’t part with them in my closet. Maybe because they were expensive. I’m guessing for Halloween one year I can be Jenny From the Block, circa 2003,” says Min.

Taking care of you

Moreover, taking pride in your appearance — just as you are probably teaching your kids to do — is a good thing. But you shouldn’t overdo it either, Min says. “I say, hold yourself to the same standards you would hold your own kids. If you look good, you’ll feel good. We try to instill confidence and esteem in our kids all the time. Feeling pride in one’s appearance is certainly part of that,” says Min. “The world won’t end if you hit the gym for an hour or go get your hair cut. But if you’re spending all your time and family’s money on beauty treatments, well, ha, that’s a different story.“

4 hrs ago
by Ambrosia V. Brody

Fans Think Brie Bella Is Pregnant Again Because of This Video & Can We Stop With This Already?