Are you feeling insecure because your child’s friends sport Halloween costumes so unique the duds seem fit for the cast of Moulin Rouge? Meanwhile, you sent your baby trick-or-treating in a get-up originally folded in a plastic bag that came from the supermarket. Well, SheKnows went searching and came back with some fantastic — and easy — ideas for your kiddo’s costume. 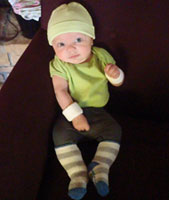 Emulate the costume that Jane Pizem crafted for her baby, Rowen.

“I picked it because it was really easy to do and we had everything we needed,” Jane said. “To make the wrist bands, I just cut off the tops of socks.” Jane added a onesie, a baby hat and some leggings for this cute fitness instructor outfit. 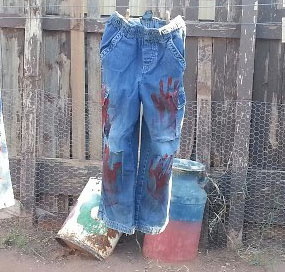 It’s easy to make a zombie costume out of old clothing and red paint, as mom Victoria Michel, who studied costume design, demonstrates.

As for the top, just head to a thrift store and pick up a cheap shirt if you don’t have something old lying around. “I was thinking of flannel button-ups since it can be cold on Halloween,” Victoria said. “Cut the shirts a bit and have the kids put red paint hand prints on them.” 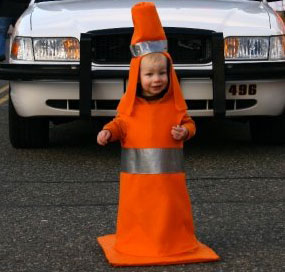 Mom, Nicole Bavo, admits her DIY costumes get “a little involved.” Her costumes are, admittedly, amazing. “Here are my suggestions for DIYers: Felt, hot glue and attention to detail,” Nicole said. “Also something your kid will actually wear makes it better.”

Nicole said that attaching a hat to a hoodie will increase the likelihood they will stay in place. She said the traffic cone is essentially a tunic or dress that is Velcroed up the back. She used an orange hoodie for the top and attached with safety pins. 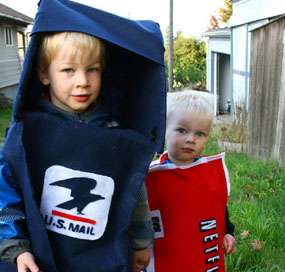 Another amazing idea by Nicole Bavo was this Mailbox and Netflix movie. Despite her evident skills she still considers herself “not that crafty.”

To get the patterns so exact, print them on a page and attach to laud the felt before cutting. “Be sure to use a rotary cutter and good fabric scissors,” Nicole said. 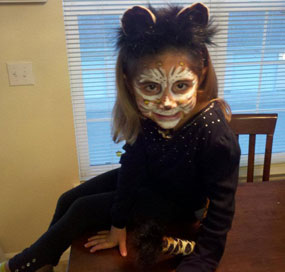 Follow mom Jayme Tortorelli’s example and give your daughter a stunning leopard costume starting with a simple animal ears kit. Use regular black or brown clothes for the “fur,” then add the ears, tail and bow from any kit. The final addition, and centerpiece of this costume, is the face paint.

“I was worried it would itch,” Jayme said. “But she never complained about the face paint bothering her.”

Visit the blog ModernKiddo, which has an entire fashion show of DIY costumes. Lisa Storms‘ blog also has a plethora of DIY costume ideas starting with a simple hoodie; they’ve been a huge hit on Pinterest.