Add some giggles when your family plays classic UNO. The bossy robot brings an element of surprise and variety to every new game!

Related story Get Popular Board Games, Play-Doh & More Up to 40% Off As Part of Amazon's Epic Daily Deals 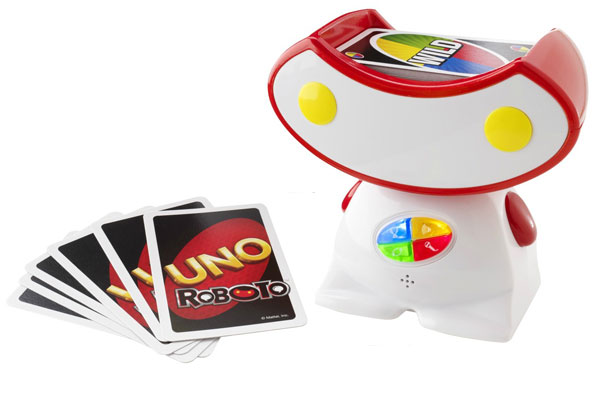 The classic card game UNO is easy to learn and provides endless hours of family fun. Many of us grew up playing UNO because it’s simple enough that kids in a wide age range can participate and play together on a fairly level playing field.

A standard UNO card deck has 108 cards in colored suits: blue, green, red and yellow. There are also action cards: Draw 2, Reverse, Skip, Wild card and Wild Draw 4 cards. Each player is dealt seven cards, with the remaining cards placed face-down in the middle of the table as the draw pile, and only the top card turned over to form the discard pile. Moving clockwise, players take turns putting a card on the discard pile. The discard must have the same number, color or wording as the top card on the discard pile unless a Wild card is discarded — in which case the player who played the Wild card can choose the color of cards to be played next. If a player can’t discard, she draws a card and discards it if she can. If not, it’s the next player’s turn. When a player discards a Wild Draw 4 card, the next player must pick up four cards. When an action card is played, the next player must follow its instructions: The player may have to draw an additional two or four cards, or even skip a turn. When you have one card left, remember to say “UNO” — because if you forget and are caught by another player, your penalty is drawing two more cards! The game ends when one player is completely out of cards.

Tally the score based on the cards left among the remaining players. Add the totals of all cards left in each player’s hand by counting the numeric value of the cards — Action cards count as 20 points, and Wild and Wild Draw cards count as 50 points each. The winner of each round gets all the points! Play until someone reaches 500 points.

The basics of this favorite game are the same in UNO Roboto, but the robot adds loads of fun! There’s a cute robotic character that sits in the middle of the table, ready to throw interesting twists and turns into the classic game. Before starting, each player can record his/her name. UNO Roboto also lets players record silly “house rules,” and even offers funny suggestions for these. Anything from “make a fish face” to “hop on one foot for 15 seconds” adds an element of surprise and brings on the giggles when the robot suddenly calls out instructions during the game. This makes the game more unpredictable and different every time you play. With this new twist, you’ll have a faster pace and more variation in your game. UNO Roboto is suitable for two to six players.

Keep spare batteries on hand so your UNO Roboto robot is always at full power when you’re ready to play.