Count your blessings. Revel in your successes. We hear these messages of positivity all the time as both parents and career women. But to be successful, you must also embrace your failures. 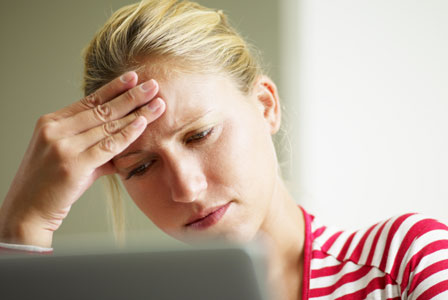 Kathy Ireland, the model, actress, designer and entrepreneur, was on Katie Couric’s show recently. Ireland is a highly successful woman who has gone from a swimsuit model featured in Sports Illustrated to a billion-dollar business owner.

On the show she spoke about how rejection in modeling helped her become more successful. “Criticism is a gift. Sometimes it’s wrapped in a nasty package… and sometimes we can learn from it,” says Ireland, a mother of three. “Don’t be afraid. Don’t let your fear paralyze you.”

Ireland’s words caught my attention as I prepared to write this column about how embracing failure can make us more successful. Who hasn’t failed at some point or another? But if we beat ourselves up or try to ignore our failings, we shortchange ourselves. Instead, we need to use it to push us ahead, as Ireland did.

Failing is a hard thing. It hurts and makes us feel vulnerable. Doubt can creep in, tearing at our confidence —  if we let it. But there’s the better way to look at failure.

We can use failure as a learning opportunity and grow from it. “Failing is very important because every time you fail, you have little clues that lead you to your goal. We place too much negativity on failing (school, standardized testing, etc.), that kids and adults alike are afraid to fail,“ says Jovim Ventura of InoPrints.

Your best bet when you fail? Instead of beating yourself up, let yourself feel the emotions — and then move on. “Failure tests your resiliency, and it helps you build faith in your ability to pick yourself back up again,“ says Nicole Bernardo, a confidence coach and strategist, who helps women create more meaningful relationships and careers.

How to learn from failure

So, how is failing a learning experience? Well, it gives you rock-solid evidence of what doesn’t work. “If you fail one million times, you learn one million things not to do. That makes it that much easier to accomplish your goal,“ says Ventura.

It can also lead you toward things that do work as well. “Failing again and again helps you chip away at the stuff that isn’t serving you anymore and guides you to see a different path or idea that you hadn’t noticed before,“ says Bernardo. “It helps you become the best version of yourself.“

Failures are a learning moment — and taking them as such can not only position you for future success but allow you to teach your kids important lessons about growing as a person. Your kids are watching, and when something doesn’t go your way, your reaction matters.