What grows faster than a parent’s instinct to protect his son? The social media buzz that follows when he demands an apology from controversial politico Ann Coulter for tweeting the ‘R’ word. 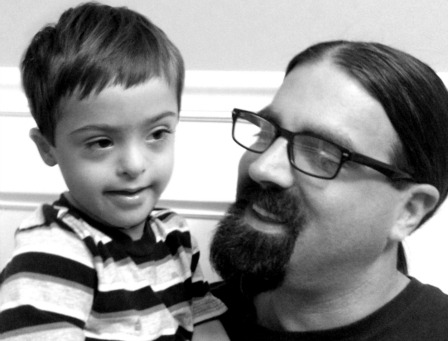 On the brink of National Down Syndrome Awareness Month, politico Ann Coulter joined a list of celebrities who have used the word “retarded” as an insult, tweeting:

“Been busy, but is Obama STILL talking about that video? I had no idea how crucial the retarded vote is in this election.”

Known for abrasive tirades, this isn’t the first time Coulter has used the ‘R‘ word to make a political argument. But this time, the difference is Dan Niblock, a father in Durham, North Carolina, with a son named Ozzie who happens to have Down syndrome (Ds).

Niblock reacted to Coulter’s tweet with a post to his friends. TODAY Moms (owned by NBCNews.com) then asked him to write the article that posted October 9.

“[The term ‘retard’ is] a slur that demeans a lot of people who have a hard enough time getting on with the business of life without having to deal with the constant reminder that a great swath of society thinks their existence is the world’s best punch line,” Niblock wrote for TODAY Moms.

“I want Ann Coulter to apologize for using a form of hate speech that is particularly searing to people who have special needs… This isn’t about Republicans versus Democrats, it’s about having class and a little decency.”

While Niblock hasn’t received an apology from Coulter to date, others have stood behind him.

Julie Cevallos of the National Down Syndrome Society (NDSS) has a young daughter with Ds. She tells SheKnows.com, “Using the word ‘retard’ or any form of it, or any other insult directed toward the condition of Down syndrome and those that have it, is not about free speech — it’s about decency, accountability and compassion.”

Parent to Coulter: ‘What is your excuse?’

Christina DeGennaro, parent to 4-year-old Rory, who has Ds, wrote to Coulter after seeing her tweet. “…When my son was born, and I sat in the hospital staring at this beautiful gift from God, learning that he had Down syndrome, I wept,“ DeGennaro wrote to Coulter.

“I wept not because I didn’t love him… because I loved him before I’d ever known him but instead I cried for all the cruel, ugliness he would face at the hands of ignorant, small-minded individuals. You, however, are educated Ms. Coulter. Therefore, what is your excuse?”

Niblock tells SheKnows.com: “Most of the problem stems from the fact that the ‘R‘ word is just a bad habit. [In most cases,] people don’t use it maliciously, they use it because they have always used it. They don’t think about it.

“I’m trying to make people think about it.”

Celeb use of the ‘R’ word

Use of the ‘R’ word by celebrities has increased so much, the organization Spread the Word to End the Word compiled a list of “cheers” for celebrities who have spoken out against use of the ‘R‘ word.

As perhaps an indicator of how few “cheers” exist, many celebrities made the “cheers” list only after using the ‘R‘ word and then apologizing for using it.

In today’s 24-hour news cycle, social media routinely serves to slow things down. Coulter tweeted at 8:39 p.m. on September 25, and Dan Niblock posted a note to his friends afterwards. His outrage went international when TODAY Moms posted his article October 9.

Within 24 hours, Niblock’s article had more than 500 comments and more than 20,000 “likes” shared to Facebook.

Since October 9, visits to Niblock’s personal blog have skyrocketed. Over two days, his blog received nearly 20,000 “pageviews” — or about the same number of visits to his blog over the previous month’s time.

While some celebrities get more backlash than others for using the ‘R’ word, two factors seem to influence how long the chatter and criticism continues: A person’s level of fame, and whether he or she used the ‘R’ word themselves or while playing a character (e.g., in a movie or TV series).

Of course, it helps when mainstream media pick up the story. One day after Niblock’s article posted on TODAY Moms, the Huffington Post picked it up on its Parents site.

In 2010, Jennifer Aniston jokingly referred to herself as a retard on Live! With Regis and Kelly.

Jean Winegardner, a Washington Times writer whose son has autism, wrote about the aftermath, “I think the most painful part about these incidents is not the original comment, but rather the backlash from commenters and pundits who think those of us who care about this word are being over-sensitive.”

A consistent refrain each time a celebrity uses the ’R’ word is, “That’s free speech!” Niblock told SheKnows.com: “Yes, it’s free speech. But these same people don’t use the ‘N’ word, I bet. Why is that? Cultural sensitivity? Fear?

“The African-American community fought hard to take control of the labels used to describe them… and they are now offered at least some level of respect in that sense.

“Does the disabled community really have to fight that fight… just because a lot of people happen to like to say ‘retard?’”

“This is not a decent way to get a rise out of people and to get a laugh,” NDSS’s Cevallos tells SheKnows.com. “That laugh comes at an expense — the feelings of a person who has enough challenges and his or her friends and family.

“It would be nice if celebrities could be heroes [and] lead the way in… teaching compassion. The everyday heroes are the parents and friends who explain this to others even when it’s uncomfortable, and who show every day just how cool their child or friend is for being who they are.“

More about children with special needs

18 hrs ago
by Emilia Mense Caby